Going Beyond the Roles We Play 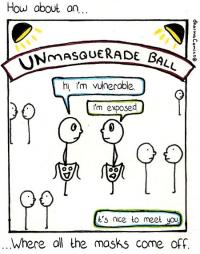 We seem so very real. But our bodies are really not our own and we have no control over either their coming or going. We have roles that we play and try to convince ourselves that they are real. It is illuminating to watch this process in kids because with them, the process is very transparent. They try on identities like they are trying on t-shirts. When they find one they like, they identify with the narrative that supports it and then they split up into mutually antagonistic groups. Adults do the same thing but adult identities are covered up under thick layers of justification that appear reasonable.

Shakespeare had it right it when he said that "all the world's a stage and all the men and women are merely players." Roles are a good thing that give us structure and purpose. But when we really begin believing in the roles we play we become more and more willing to sacrifice ourselves and others to them.

Sports are a perfect example. They are popular melodramas that are absolutely meaningless and of no consequence whatsoever. We invest huge amounts of emotion in them involving a relatively mild form of human sacrifice. Thankfully, we don't drag people up on an altar to cut their throats and tear out their hearts any longer but we do dress them up in football uniforms and cheer as they beat their brains out. I saw a picture of Brazilian fans after their World Cup loss to Germany. Had I not known better I would have thought they were watching their children being torn apart by wild dogs.

The purpose of religion and spiritual practices is to see beyond our individual dramas to a greater, transcendent truth. Everyone who practices a religion understands this. Nevertheless, the practice of religion largely consists of bitter fighting over competing mythologies.

Mindfulness isn't about what we believe. It is the simple act of paying curious and non-judgmental attention to the present moment. The present moment sounds pretty good. We hear that and imagine a state of bliss. Then we spend a little time in the present we find that is mainly made up of one thought after another. We hate that and complain that we can't get the mind to stop. Minds don't stop. Minds think. We can only observe the endless stream of stories and witness our desire to believe them without actually believing them. That isn't so easy.

Mack Paul is an Oklahoma native. He began meditating to help cope with the stresses of his job teaching junior high special ed students. He retired in 2013 and now works as a special ed teaching assistant.

Seed questions for reflection: How do you relate to the notion that "when we really begin believing in the roles we play, we become more and more willing to sacrifice ourselves and others to them?" Can you share a personal story of a time that you caught yourself believing too much in your role? How can we be more mindful of the separation between ourselves and the roles we play?

Every week, we send out a digest with a reading and inspiring stories to our global community of 93,437 people. Subscribe below.