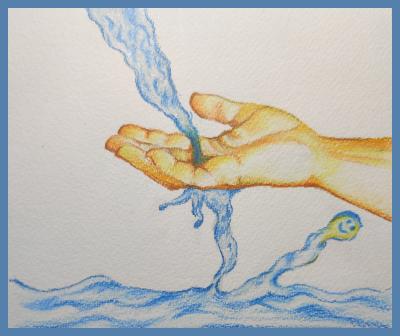 Some years ago, I was stuck on a crosstown bus in New York City during rush hour. Traffic was barely moving. The bus was filled with cold, tired people who were deeply irritated with one another, with the world itself. Two men barked at each other about a shove that might or might not have been intentional. A pregnant woman got on, and nobody offered her a seat. Rage was in the air; no mercy would be found here.

But as the bus approached Seventh Avenue, the driver got on the intercom. 'Folks,' he said, 'I know you have had a rough day and you are frustrated. I can’t do anything about the weather or traffic, but here is what I can do. As each one of you gets off the bus, I will reach out my hand to you. As you walk by, drop your troubles into the palm of my hand, okay? Don’t take your problems home to your families tonight, just leave them with me. My route goes right by the Hudson River, and when I drive there later, I will open the window and throw your troubles in the water.'

It was as if a spell had lifted. Everyone burst out laughing. Faces gleamed with surprised delight. People who had been pretending for the past hour not to notice each other’s existence were suddenly grinning at each other like, is this guy serious?

At the next stop, just as promised, the driver reached out his hand, palm up, and waited. One by one, all the exiting commuters placed their hand just above his and mimed the gesture of dropping something into his palm. Some people laughed as they did this, some teared up but everyone did it. The driver repeated the same lovely ritual at the next stop, too. And the next. All the way to the river.

We live in a hard world, my friends. Sometimes it is extra difficult to be a human being. Sometimes you have a bad day. Sometimes you have a bad day that lasts for several years. You struggle and fail. You lose jobs, money, friends, faith, and love. You witness horrible events unfolding in the news, and you become fearful and withdrawn. There are times when everything seems cloaked in darkness. You long for the light but don’t know where to find it.

But what if you are the light? What if you are the very agent of illumination that a dark situation begs for?. That’s what this bus driver taught me, that anyone can be the light, at any moment. This guy wasn’t some big power player. He wasn’t a spiritual leader. He wasn’t some media-savvy influencer. He was a bus driver, one of society’s most invisible workers. But he possessed real power, and he used it beautifully for our benefit.

When life feels especially grim, or when I feel particularly powerless in the face of the world’s troubles, I think of this man and ask myself, What can I do, right now, to be the light? Of course, I can’t personally end all wars, or solve global warming, or transform vexing people into entirely different creatures. I definitely can’t control traffic. But I do have some influence on everyone I brush up against, even if we never speak or learn each other’s name.

No matter who you are, or where you are, or how mundane or tough your situation may seem, I believe you can illuminate your world. In fact, I believe this is the only way the world will ever be illuminated, one bright act of grace at a time, all the way to the river.

One of the things we have taught both of our kids since they were little is to always smile at people going by, it may be the only smile they get that day. This piece makes me think of that and how we are teaching them to be the light even if it is only to one person. I need to do a better job of being that light myself.

I want to be famous and rich

In its simplest form being a light worker is showing people that we come into contact with in our daily lives that we care about them. It is about listening to others which is a huge life skill. Leaving each person that we meet feeling better about themselves, either by sharing a smile, giving a compliment or saying please and thank you.

I went to the hardware store during the day to get a key made. The guy who was going to help me was very grizzled, long grey tangled hair; he limped and his face was in a decided scowl. I, on the other hand, was a guy who had the leisure to go get a key made in the middle of the day. I could see that he was disinclined to have anything to do with me besides key making. But next to the key machine was another machine that I hadn't seen before. I asked him if it was a knife sharpening machine, he said it was. I asked if it worked, he said, "It doesn't get them as sharp as I like them." He made it clear that he was disgusted. I asked if he sharpened his own knives (like I do) and that one question launched a long conversation about knives, sharpening stones, and techniques. It was a great chat, he lightened up and we parted in a friendly place.

When I was a teen many many moons ago, there was a Paulist priest who had a nation-wide campaign that if each of us were to light one little figurative "candle" we could illuminate the world. This is so true as true change begins with ourselves.

Can be as simple as sharing your smile ðŸ˜Š

Just being sweet to anyone in trouble is being an illuminator. "With a spoon full of sugar, the medicine goes down" ...

Being an agent of illumination means to me to let my inner light shine. My inner light is the Light as it shines through me as what I am experiencing, as my feeling or insight or idea. It's my truth. It's often thinking outside the box. Being an agent of that inner illumination means for me to rise above a situation rather than be stuck in it, and have the courage to express and use the inner illumination to make a positive contribution to the situation rather than do nothing or commit some negative action. For example, I told Joe I felt uncomfortable hearing his lengthy self-berating and feeling sorry for himself. My discomfort was my light, and my sharing it with him with care seemed to be a light for him on what he was doing, and he proceeded to self-berate and feel sorry for himself less. What helps me be the light is to look for it, pay attention to it and value it, and have the courage to offer it and let it shine in a positive way.

Teaching high school during this past three years has been extraordinarily trying, and my hubby keeps reminding me to 'find the blossoms'. When the well of creativity seems dried up, and the stress of implied judgment seems overwhelming, there is a level of questioning that digs deep into the recesses of the heart attempting to protect itself from the outside world's unrealistic demands. And then this beautifully timed endearing 'talk story' arrives, and completely changes the trajectory of the day. I shared with the entire staff. Thank you for taking the time to put this out there, today, for all of us to be able to make a difference by just being ourselves-knowing now there are many others practicing this right now, today.