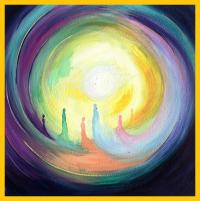 Thank you for your experiences strength and hope! I can really relate to your story. It's crazy how we think we are the only ones having this wild experience lol. This really opened my view to life.

I love the storytelling "I" that surrounds aer self in a mysterious wondrous healing adventure. Any and every moment that I find a feeling arising from unmet needs I return to gratitude and feel enfolded in the arms of love against a breast of a loving beating heart and know that all experience is a re-frameable choice. " Every little cell in my body is happy, every little cell in my body is well!"

I use the word we a lot. The we is reallyme (I), which tells me that I am not just a single entity but at any given time I am different, self, father, husband, brother, son (to mother to father) friend... nota one but a many faceted being. So, nothing is is singular we are all connected. Duality of the one.

this is where buddhism differs from hinduism. i do not agree with "no self". i believe in the opposite of "no self": the one self - awareness - that permeates all, and is the eternal, unchanging self.
the question still applies: how does the eternal, unchanging self deal with the impermanence of the body, the mind, and it's impermanence and afflictions? moment by moment.

If there is no Self, whose arthritis is this? In understanding my story, I begin to understand how my ego has separated from my highest self, this is duality. But I cannot be so sure that it is from many lifetimes and endless experiences for all of humanity that has created this delusional-reality that we all live in. I am not a practicing Buddhist, but I am, as everyone on this planet, on a spiritual journey. In the search for my Truth, I have come to understand many concepts from many traditions and cultures, and there are similarities. My stories in this lifetime are made up of experiences - It is my ego who has kept me safe, an untethered sense of survival and “I can do it” that has conquered over the whispers of truth that lie within spirit and God. She takes in all of my “bad” experiences, mentally, emotionally and physically and creates a web of armor that ignores the truth, instills fear and knows better than God. And when I get hurt again and a... [View Full Comment] If there is no Self, whose arthritis is this?

In understanding my story, I begin to understand how my ego has separated from my highest self, this is duality. But I cannot be so sure that it is from many lifetimes and endless experiences for all of humanity that has created this delusional-reality that we all live in.

I am not a practicing Buddhist, but I am, as everyone on this planet, on a spiritual journey. In the search for my Truth, I have come to understand many concepts from many traditions and cultures, and there are similarities.

My stories in this lifetime are made up of experiences - It is my ego who has kept me safe, an untethered sense of survival and “I can do it” that has conquered over the whispers of truth that lie within spirit and God. She takes in all of my “bad” experiences, mentally, emotionally and physically and creates a web of armor that ignores the truth, instills fear and knows better than God. And when I get hurt again and again, she tries even harder and then enters the depth of shame. To identify her (Ego) as an enemy only gives her more fuel and widens the gap of duality; and overtime she has become my Identity. And that is something I can change.

To live in this world is to experience all of it! Embracing all of me, being in the silence to hear God, being awake and aware to live in the joys and sorrows of being human, breathing in life to its fullest - and if that includes a bit of pain, in time I embrace that too. And then I move on.

It is the fluidity of my life that keeps me connected.

A bit esoteric to begin with, but if we sit with it, let it embrace our hearts, we will see Truth and it will set us free. }:- a.m.

I'd like to share an experience that happened to me.
i was with a group of my husband's medic friends & aqaintances having a pre- theatre meal. The conversation was mainly around the topic of medicine & views were being exchanged. I felt left out, unable to join in & was increasingly irritated & felt trapped. Into this state popped in a question - "who is feeling alienated?" With the emphasis on WHO. The feelings just dissolved & i felt immediate release. Th nightbefore i had been reading a practice in Jack Kornfield's book- repeatedly asking oneself Who am I?.
With appreciation for the article. Patricia

The questions still bewilder me until today. I do not understand the claim about no-self, on a practical level, that is. Yes, one can present convincing arguments about it that may refine our view about the self. But I do not think it will have any real significance until it is fully experienced.

In the meantime, as a person troubled by emotions, I am satisfied by not asserting a no-self view but rather working hard to decrease the negative impacts of such a view, beginning with the inflated sense of ego.The Dalai Lama in one of his videos is very clear about developing a healthy sense of self, not a denial of it. The view of reality as it is comes in time, and it is fruitless to force it by intellectual understanding.

Awareness of this ongoing mentalmelodrama and chattering is a way of going beyond the storytelling of suffering. Ii is not easy to wake up from the slumber of self-created suffering. It is hard to be free from the self-created shackles of suffering. It is journey of self-awakening. Waking up from the nightmare of suffering is not easy. It is difficult to rise up from the self-generated fall, to wake up from the sleep and remain awake. I have been learning and practicing to keep the lamp of awarenessshining in my transactions with others in my everyday life. Practicing mindfulness in my everyday life has been very helpful to me. Such practice helps me from draining my emotional energy and not losing my healthy emotional vitality.
Namaste!
Jagdsih P Dave'