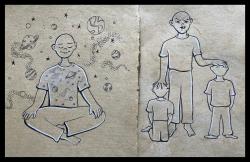 The great angst of modern life is this: no matter how hard we try, no matter how successful we are, no matter how good a parent, worker, or spouse we are – it’s never enough. There is always someone richer, thinner, smarter, or more powerful, someone that makes us feel small in comparison. Failure of any kind, large or small, is unacceptable. The result: therapist’s offices, pharmaceutical companies, and the self-help aisles of bookstores are besieged by people who feel they’re not okay as they are. What to do?

One response has come in the form of the self-esteem movement. Over the years there have been literally thousands of books and magazine articles promoting self-esteem – how to get it, raise it and keep it. The pursuit of high self-esteem has become a virtual religion, but research indicates this has serious downsides. Our culture has become so competitive we need to feel special and above average just to feel okay about ourselves (being called “average” is an insult). Most people, therefore, feel compelled to create what psychologists call a “self-enhancement bias” – puffing ourselves up and putting others down so that we can feel superior in comparison. However, this constant need to feel better than our fellow human beings leads to a sense of isolation and separation. And then, once you’ve gotten high self-esteem, how do you keep it? It’s an emotional roller-coaster ride: our sense of self-worth bounces around like a ping-pong ball, rising and falling in lock-step with our latest success or failure.

One of the most insidious consequences of the self-esteem movement over the last couple of decades is the narcissism epidemic. Jean Twenge, author of Generation Me, examined the narcissism levels of over 15,000 U.S. college students between 1987 and 2006. During that 20-year period, narcissism scores went through the roof, with 65 percent of modern-day students scoring higher in narcissism than previous generations. Not coincidentally, students’ average self-esteem levels rose by an even greater margin over the same period. Self-esteem has also been linked to aggression, prejudice and anger towards those who threaten our sense of self-worth. For example, some kids build up their egos by beating up other kids in the playground. It’s hardly healthy.

Of course we don’t want to suffer from low self-esteem either, so what’s the alternative? There is another way to feel good about ourselves: self-compassion. Self-compassion involves being kind to ourselves when life goes awry or we notice something about ourselves we don’t like, rather than being cold or harshly self-critical. It recognizes that the human condition is imperfect, so that we feel connected to others when we fail or suffer rather than feeling separate or isolated. It also involves mindfulness — the recognition and non-judgmental acceptance of painful emotions as they arise in the present moment. Rather than suppressing our pain or else making it into an exaggerated personal soap opera, we see ourselves and our situation clearly.

It’s important to distinguish self-compassion from self-esteem. Self-esteem refers to the degree to which we evaluate ourselves positively. It represents how much we like or value ourselves, and is often based on comparisons with others. In contrast, self-compassion is not based on positive judgments or evaluations, it is a way of relating to ourselves. People feel self-compassion because they are human beings, not because they are special and above average. It emphasizes interconnection rather than separateness. This means that with self-compassion, you don’t have to feel better than others to feel good about yourself. It also offers more emotional stability than self-esteem because it is always there for you – when you’re on top of the world and when you fall flat on your face.

Instead of endlessly chasing self-esteem as if it were the pot of gold at the end of the rainbow, therefore, I would argue that we should encourage the development of self-compassion. That way, whether we’re on top of the world or at the bottom of the heap, we can embrace ourselves with a sense a kindness, connectedness and emotional balance. We can provide the emotional safety needed to see ourselves clearly and make whatever changes are necessary to address our suffering. We can learn to feel good about ourselves not because we’re special and above average, but because we’re human beings intrinsically worthy of respect.

Kristin Neff is a researcher. Excerpted from here.

SEED QUESTIONS FOR REFLECTION: What does self-compassion mean to you? Can you share a personal story that illustrates the difference between pursing self-esteem and nourishing self-compassion? What helps you make space for self-compassion?

Most "good religion" of man are based in a belief that humans emanate from Divine LOVE. As such, we are of course worthy of love, grace, mercy and compassion. When we embrace that truth we experience the fullness of our humanity and are enabled to be all of that to and for others. }:- a.m.

One tool that helped make space for self compassion is a bullet journal. A bullet journal combines a planner, a habit tracker, a sketchbookand a notebook.I use my bullet journal for setting intentions, monthly planning, journaling, doodling, and tracking various habits. I'm not as disciplined as I'd like about writing in it, but it's always there whether I want to jot down a to-do list, to recallmy goals, or to make sense of my thoughts and feelings. It's a tool that helps me to encounter reality, toaccept it, and to recognize opportunities for change and growth. This tool gives me a greater sense of agencyin my life.

Just as the quest self esteem has been taken to the absurd, so has the admonition to set borders. I am hearing people rudely reject others by saying "these are my borders." This phrase makes good sense when one is protecting herself from abuse, But it can also be used to close doors to understandingand promoteself righteousness (or a fake kind of self esteem.)

When I was studyingat the University of Chicago my self-esteem was somewhat wounded when I compared myself with other students who were brighter than me. I felt a sense of inferiority. My self-esteem was affected by what was going on in my mind, thoughts of not-good enough. When I developed friendship with aforeign studentwho felt compassion for me. I felt his empathic understanding and kindness for me. His compassion for me enkindled the light of self-compassion and self acceptance in me. I am very grateful to him for bringing me out of the dark period of my life.

Whathelps me make space for Self-compassion? I find the idea offered by KristinNeffquite helpful. As she writes, " Instead of endlessly chasing self-esteem, we embrace ourselves with kindness."Being empathic and compassionate to myself is very helpful to me to cultivate self-compassion. Practicing mindfulness meditation and non-judgmental self-awarenesshave been a blessing to me.

May we cultivate self-compassion and compassion for others as we are going through tough times in our life!