A Higher Level Of Conscious Engagement 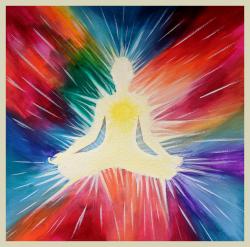 We live in an age of spiritual smorgasbord: People are mixing concepts, aphorisms, and insights from a broad variety of mystical and faith traditions. A blend of notions culled from many spiritual paths is now surfacing as popular prescription for all and sundry seekers: “Believe everything will turn out perfectly”; “deny the power of the negative by emphasizing the positive”; “always trust your intuition”; “focus on being and becoming over doing or engaging in activism”; “don’t get caught up in the world of forms and illusion”; “live in essence.” Such a list is clearly a simplistic reduction of the requirement of spiritual practices that are designed to transcend the limits of the ego.

A superficial mysticism is now being applied as broader social commentary. Rumi is on everyone’s lips: “Out beyond ideas of wrongdoing and rightdoing, there is a field. I’ll meet you there.”

Such a pronouncement raises moralists to their feet to make us aware that Rumi’s words may hold a kind of psychospiritual truth but are no basis for creating a morally enlightened society. The moralist is quick to nail the consequences of our choices. We are urged to remember that our choices can be highly creative or deeply damaging to social order and communal life. Our choices can be a curse or a blessing in the lives of others and for the life of the planet. Moral activists urge us to develop the will to consciously set values, codes, and laws, and to adhere to them.

Social activists, on the other hand, will often remind us that progress is not guaranteed, and that it is incomplete in many arenas. They also remind us that there is a constant need to struggle against narrow self-interest and even regressive forces that seek to roll back gains made by previous generations. They spur our conscience to remain vigilant and plead with us to give our attention to everything from poverty to pollution. Activists are sometimes harshly judged for being overly concerned with deficiencies and inadequacies in social and political systems, and are viewed as too negative or coming from a “scarcity”consciousness. But the reality is that they are trying to grab our attention, and have us focus on concerns that have fallen off the radar screen of our awareness.

The challenge for both moral and social activists is to avoid getting spun out by the need to change dysfunctional human behaviors and unjust systems. They should seek to avoid corrosive judgmentalism: When exuberance for justice leads to the demonization of others, more injustice is being perpetrated. Constant unresolved anxiety, frustration, anger, and even outrage can lead not only to burnout, but to a fixation on the externals of the problem. The attention of the activist can get trapped in the field of action and disconnected from the nurturance of being itself.

Likewise the challenge for the spiritual seeker is to avoid becoming self-absorbed. As the Dalai Lama has pointed out, it is not enough to meditate and to develop compassion for others, one must act.

Robust action can be surrendered to the highest principles of love, forgiveness, and reconciliation as Gandhi and others have demonstrated. These exemplars of higher consciousness have paved the way for a more universal shift in human consciousness. To stand in the fires of hostility, exploitation, and hatred with a stance that is both deeply compassionate and spiritually detached, and at the same time generative of creative and enlightened action, is now the task of the globally conscious citizen.

We can increase our inner strength to make critical choices for ourselves and for the planet by refraining from cluttering up our lives with too much superficial choice. The choice to surrender to higher guidance, to listen deeply to one’s inner voice and soul’s beckoning, is not passivity, but a higher level of conscious engagement.

James O'dea is an author of several books, former President of IONS and Washington Director of Amnesty International. Excerpted from here.  For more, here's a recent conversation with James.

SEED QUESTIONS FOR REFLECTION: What do you understand by the 'choice to surrender to higher guidance'? Can you share a personal story of a time you were able to enter a stance that was both deeply compassionate and spiritually detached? What helps you avoid the dual traps of self-absorption and superficial understanding?

There is a truth inside me that comes from neither my mind or my gut. It is a whispering of knowing that isn't of reason. It's driven from something outside of me because prior to needing it it wasn't known to me. When I pay attention to this it feels powerful and clear. My mind often dismisses it our turns it into something else that I then may not follow but when I do it is perfect.

James O'Dea'sstatements about the pitfalls of "corrosive judgmentalism" and self-absorption resonate with me...the profundity of his message lies in his clarity of thinking about the "big picture" of social activism that Gandhi and others have modeled for us through their "experiments with Truth."

“ I consider this an extremely important and and exceptionally lucid analysis of the contemporary spiritual/personal development scene. Many years ago, Byron
Katie, one of the truly great figures of the world-wide field of personal development, stated that the number one problem of the world was not issues like hunger, war, etc. but CONFUSION. This is truer every day. James O’Dea brings authentic sanity into the debate on the spiritual scene. Thank you,James for being so lucid and clear. We hope this extremely important piece will get a very broad circulation.” Pierre Pradervand

I so appreciate the comment about "..when exuberance for justice leads to the demonization of others"~~something we often see happen in our society. This seems to call us to develop hearts full of compassion that can hold both the just and the unjust~~each person, with their dark side included.

"Both/And" is the key and of course it starts with our own selves. #transformation #change
}:- a.m.

Thank you, James, for highlighting the resemblances and differences between moral and social activism and the need to become self-absorbed but actively engaged while keeping the lid on judgmentalism. So much food for contemplation.

The choice to surrender to higher guidance means to me, in the words of James O'dea, "to listen deeply to one's inner voice and soul's beckoning." For me, that typically includes a well-informed knowledge base gained through openness, study, and reflection. My most satisfying stance is when I am both deeply compassionate and spiritually detached. In that stance I deeply and sincerely care about the person or cause while I and my well-being are independent of the person or cause and of the outcome, knowing I don't control either. What helps me is being clear about what I am and am not responsible for. That is, I am responsible for my action, and am not responsible for outcome. When I am committed to right action and don't try to control outcome, I avoid the traps and stay free.

When I see people who are suffering physically, mentally and emotionally I feel
deep compassion for them. I extend my hand to help them by counseling or doing what I can to reduce theirsuffering. My actions are based on my deep compassion for them without expecting anything in return. This is my way of practicing Karma Yoga. This way I am detached spiritually, fully engaged without being bound by my attachment to the fruits of my action. This is also an example of a higher level of conscious engagement. Living this way brings deep joy and fulfillment in my life.

Keeping the light of self-awarenessand following that light helps me avoid self-absorption and superficialunderstanding. I have learned to step aside when a selfish thought or a desire arisesin me. Remaining awake and aware helps me ofnot getting trapped by my self-absorption and superficialunderstanding. Light ofself-awarenesskeeps me walking on the right path.
Namaste!
JagdishP Dave'