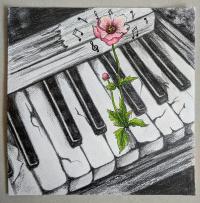 SEED QUESTIONS FOR REFLECTION: How do you relate to the opening created by accepting the reality of the situation completely and making that the basis of our creation? Can you share a personal story of a time you were able to create on a foundation of the reality in front of you? What helps you create in tune with reality?

Agree it is one of the greatest â€¦..fill in the blank of all times.

Options can descend into complacency, thus not giving the opportunity for "hard work" or using our full ability. Often our best work happens in circumstances where time, space and resources are limited. One is forced to tap into internal strength, remembrance, originality married to creativity.

This is a good story

A compassionate move led to a creative energy and focus that created something amazing. Limitations and constraints can lead to unfettered freedom. Definitely a lesson to consider.

Beautiful story of perseverance,playing with what you're dealt and making it work!

I find this story quite inspiring. I have personally witnessed few things in my life. Sometimes, I have met sadness and discouragement in my life because it appeared not the right or easy way. But as I didn't have any other choice, I kept my efforts and life manifested for me in the most wonderful way I could imagine. Perhaps, if I had given the choice, I would not have manifested that life for myself.

FromKeith Jarrett’s Köln's experience I learnt that the piano is like life ! sometimes it will be totally in alignmentand sometimes it won't it depends on us how we make best of the situation. We can either succumb to the circumstances or see it as an opportunity !

So once I had to take basics of filmmaking for a group of kids, the group of kids were not as big as I expected and I was a bit disheartened. But I thought I could now give more personal attention to each one of them and also we had more space to shoot !

One thing I didn't understand about Jarrett's personality is reading his personality in this article if it wasn't for the 17 yr old he might have had the show canceled. So it was a bit paradoxical.

I apologize for deviating from the subject. Just had to share my comment. I’m so glad to read this article. It gives me so much perspective. I’ve been truly absorbed with this concert of Keith Jarettand his other musicsince the 70’s. His music is transcendental. Sitting in the dark hearing him play is truly uplifting.

I love to dance. It brings me joy. I joined a dance group that meets once a month and it is mostly couples who sign up. As a single there were very few chances to dance with a partner. But the joy of the music spun me onto the dance floor and I rarely sat down that first night. Other ladies who were there without a partner also came onto the dance floor and we danced around each other. It was as if the dance was me and I the dance. I expressed myself through music or was it the notes that expressed themselves through me...

My all time favorite piano piece as well. Jarret not only made do with the old piano, but they thrived and created something perhaps "better" and beautifully new. We can do the same with everything life hands us. }:- a.m.

So what? What do we learn from this piece of ... erm... unbroken admiration for an eccentric musician? Does he feed the hungry? Is there any wisdom of how to interact in a harmonic and friendly way with things, people and the music? ... lol ... Does it not just shows a typical western bahavior of >if you don;t want, I will use force my way< ? ... It simply shows that people have not learnt, yet

Accepting the reality of the situation was the opening for Keith Jarrett to work and play with that reality. He started to quit on the project, and then decided to use what he had, making it the basis of hiscreation. Playing the piano the way Keith Jarrett is described to play is to play out of one's inner self. The playing is spontaneous and creative, not scripted and rehearsed. I create on a foundation of the reality I'm in when I'm in the present relating to what I am experiencing in relation to and in response to the person I am with. I don't have an intention or goal; I'm not trying to get anywhere or accomplish anything; I'm simply in and with the process as its happening. In that experience I am creating in tune with the reality I am in. What helps me do that is the aliveness, excitement, joy, and satisfaction in doing it, and the positive outcome that usually comes from it.