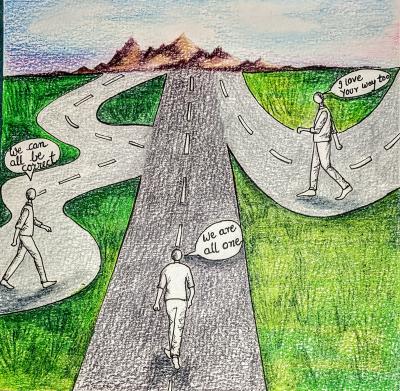 My friend Julie and her husband argue about the “right” way to do laundry: he loads the washing machine with dirty clothes, adds a cup of detergent on top, turns on the machine, and walks away. Julie, on the other hand, is a firm believer in starting the water flow, pouring-in the soap, and then adding the dirty clothes to the mix. They both want the same end result: clean clothes, but they go about it differently because his priority is minimal effort and to be done as quickly as possible, while Julie's priority is to make sure the soap fully dissolves in the water before adding the clothes.

It reminds me of working in the kitchen at the monastery, where two members of the kitchen staff were asked to peel and cut ten pounds of carrots into small matchstick-sized strips. It took them about four hours, which drove the efficiency expert in me crazy. “Why not use the food processor?” I asked the head of the kitchen, “They would be done in 10 minutes!” And he told me the goal wasn’t to get the job done as quickly as possible, it was to offer the students four hours of mindfulness practice in the kitchen.

You see, what I failed to do was contemplate the WHY behind his instructions. The food processor would have chopped those carrots in minutes, that's true, but the kitchen manager prioritized a meditative practice over efficiency and expediency (at a Buddhist monastery no less... Go figure!) Why do we always assume we know what's best? I took myself to the meditation hall and sat with my ego until it agreed to play nice.

We sure do excel at judging what people do and how they do it, but we fail miserably at trying to understand the WHY behind their actions. When we share a similar goal with someone but their priorities differ from our own, their actions seem backward to us, counter-intuitive, silly, and even “wrong.”

Think about it: if you keep getting irritated by someone who refuses to change, it means you also refuse to change, right? Saint Francis of Assisi knew the importance of seeking to understand rather than to be understood. And since we can't wrap our heads around other people's logic by using our own, let's not criticize what we don't even try to understand, because once we get it, there would be nothing left to criticize.

Go ahead and contemplate the WHY behind your own actions, and you might find you have that in common with everyone around you.

Inner peace is the first step we can take to live in peace with others, so let’s take that step together.

Timber Hawkeye is an author and a mindfulness coach.

SEED QUESTIONS FOR REFLECTION: How do you relate to the exhortation of not criticizing what we don't even try to understand? Can you share a personal story of a time you avoided the temptation to criticize and instead tried to understand? What helps you remain committed to understanding the why behind your own actions and those of others?

My experience of the same has been slightly different, when I took time and understood the other and their actions, I realised that there are many people who are ready to threaten the other to get their own benefits met which are meagre in nature. When i understood this, I knew I had to take an action instead of letting this go on. It took me 2-3 years and loss to understand that humans can do that. And it took me long time to see because acting with half knowledge is way more destructing. Understanding before taking actions does cost you in short term, but will benefit in long run.

Grrrrrrrrrreat message, gives me an idea.
When my critical self starts criticizing.
To tell it â€œshhhhhhhhh, letâ€™s contemplate insteadâ€.

The judge in me is always quick to point out a better, faster, or more efficient way of doing most things! Another part of me is the quiet one, who sends me the signal to stop, listen, wait and then respond. I find that I like myself much more when I heed the quiet one rather than the judge, and so do the people around me.

Not just finger-prints but the pathways to enlightenment are also infinite, but all lead to the same eternal goal !

I support not criticizing what we don't understand, which means we would criticize very little. When I pay attention, watch, listen, ask questions, am open, and learn, I gain at least some small amount of understanding, which I think is of more value than criticism for everyone involved. I'm not into understanding the why. I don't believe there is a why as in one cause or explanation. I think 'why' is the whole context which can be very big and complex. As Ed Lorenze pointed out, a factor in why a storm happens in New York City is a butterfly flapping its wings in South America. On the biggest level, why something happens is everything that has happened in all of creation. I want to appreciate some of the important factors in the context out of which an action comes. What helps me remain committed to that is my finding it interesting, finding it to be a way to get to know the other, my satisfaction in learning, and the other's satisfaction in being better known.