That Friend Walking Behind Me 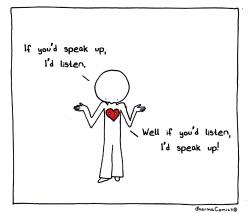 Imagine that for many years a friend had been walking a block behind me, calling my name, trying to get my attention because he wanted to tell me some hard but healing truths about myself. But I -- afraid of what I might hear, or arrogantly certain I had nothing to learn -- ignored his calls and kept on walking.

So my friend came closer and called my name louder, but I walked on, refusing to turn around. Closer still he came, now shouting my name. Frustrated by my lack of response, he began to throw stones and hit me with sticks, still wanting nothing more than to get my attention. But despite the pain I felt, I kept walking away.

Since calls and shouts, sticks and stones, had failed to get my attention, there was only one thing left for my friend to do: drop the bomb called depression on me. He did so not with intent to kill, but in a last-ditch effort to get me to turn toward him and ask a simple question: “What do you want?” When I finally made that turn -- and began taking in and acting on the self-knowledge he’d been waiting to offer me -- I took first steps on the path to wellbeing.

True self is the self with which we arrived on earth, the self that simply wants us to be who we were born to be. True self tells us who we are, where we are planted in the ecosystem of life, what “right action” looks like for us, and how we can grow more fully into our own potentials. As an old Hasidic tale reminds us, our mission is to live into the shape of true self, not the shape of someone else’s life: "Before he died, Rabbi Zusya said: 'In the world to come they will not ask me, ‘Why were you not Moses?’ They will ask me, ‘Why were you not Zusya?’”

Memo to myself: Stay on the ground, turn around, ask and listen! True self is true friend -- it’s a friendship we ignore at our peril. And pass the word: friends don’t let friends live at altitude!

Parker Palmer is a writer, speaker and activist who focuses on issues in education, community, leadership, spirituality and social change. He is the author of Let Your Life Speak. The above excerpt is from his article, Down is the Way to Well Being.

SEED QUESTIONS FOR REFLECTION: What does 'true self' mean to you? Can you share an experience of a time you felt the presence of your 'friend'? What helps you come down from altitude and connect with your 'friend'?

what I want is the very things that cause my depression...paradox...

Amazing one, also we can come to our true self if we listen our intuition the more we are connected with it the sooner you´ll encounter with your true self again... :D

I studied in a Gandhian School listening to and reading Gandhi's words-"Be true to yourself." As a child I kept on wondering what does this mean? What can I do to be true? And now in the evening of my life, I am getting a glimpse of it. I understand that When I allow my True self to speak and give space for reflection on what is being said, and then try to live that wisdom, I am  'being true to myself''.
I am still on the way to finding out more.
Thank you for sharing this beautiful write up.

Perfect timing! Just had an experience this weekend, my first sweat lodge. In that moment of entire darkness, in a supportive circle enveloped by steam we both listened to each other, called out our own prayers, intentions and hopes as well as our needs. It was extremely powerful. Depression has been my "friend" for the last several months. After 7 rounds of sweats in 2 days, I feel released, renewed and reawakened to all the universe has in store for me on this path. I was blocking myself. I feel more opened again. Grateful. It was intense to sit in darkness and allow everything to wash over and to pour forth (literally and figuratively) Hugs from my heart to yours! Kristin

such a beautiful piece