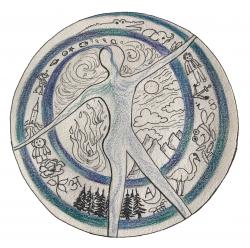 SEED QUESTIONS FOR REFLECTION: How do you relate to the notion of a universal human? Can you share a personal story of a time you aligned your personality with your soul? What helps you sense that you have an immortal component beyond your mind and body?

A universal man is one who thinks of the whole world & the welfare of all human beings like 'Jai-Jagat' victory of the whole world .he may be sitting in one corner of the world like acharya vinoba bhave,but thinks & works for the welfare of the humanity,working for act locally & think globally.acting is more important rather than thiking.Because acting changes man as well as Society.
Dr.Geeta Mehta

Yes this universal human is same as "Purusha" as we call in Yoga and Samkhya Philosophy
It has Characteristics of
All Knowing
With Complete Satisfaction
Knowledge without beginning
Freedom
All Knowing
Having immeasurable power
We all have this characteristics within us. We just require to practice to come out of Chitta vritii.e. Personality complex

Since I was a teenager I believed the world was my class room... and I was eager to learn! To be a universal human would be to expand the horizon beyond the known borders, and believe that we could blossom anywhere, if we chose so. Our soul will always hint us the way...

There are many small examples of my personality in alignment with my
soul. This morning I went to SwaminarayanMandir-Temple-with my friends. I saw old and young, man and woman, multiracial, multiethnic, multi religious people in the temple. My friends and I felt the sense of Universal oneness in the sacred place. When we came out from the temple, I ran into a small family-father, mother and a little child being held in his father's hands. He looked at me with a childlike innocent smile. He extended his little hands towards me to reach out. I held him im my hands close to my heart. It was a heart filling experience of onenessgoing beyond all apparent differences. And I get such heart-filling gifts amy times.

What helps me to have such beyond man-made boundaries is my open mind and open heart to receive such gifts. In such moments, time and space melt away. It's a pure experience of here and now consciousness, an experience of soul transcending body and mind. As the author Gary Zukav says, " We are all universal humans in training."