An Unusual Gift From My Grandfather 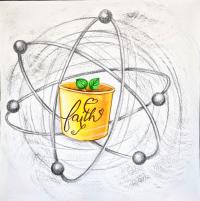 Once he brought me a little paper cup. I looked inside it expecting something special. It was full of dirt. I was not allowed to play with dirt. Disappointed, I told him this. He smiled at me fondly. Turning, he picked up the little teapot from my dolls' tea set and took me to the kitchen where he filled it with water. Back in the nursery, he put the little cup on the windowsill and handed me the teapot. "If you promise to put some water in the cup every day, something may happen," he told me.

At the time, I was four years old and my nursery was on the sixth floor of an apartment building in Manhattan. This whole thing made no sense to me at all. I looked at him dubiously. He nodded with encouragement. "Every day, Neshume-le," he told me.

And so I promised. At first, curious to see what would happen, I did not mind doing this. But as the days went by and nothing changed, it got harder and harder to remember to put water in the cup. After a week, I asked my grandfather if it was time to stop yet. Shaking his head no, he said, "Every day, Neshume-le." The second week was even harder, and I became resentful of my promise to put water in the cup. When my grandfather came again, I tried to give it back to him but he refused to take it, saying simply, "Every day, Neshume-le." By the third week, I began to forget to put water in the cup. Often I would remember only after I had been put to bed and would have to get out of bed and water it in the dark. But I did not miss a single day. And one morning, there were two little green leaves that had not been there the night before.

I was completely astonished. Day by day they got bigger. I could not wait to tell my grandfather, certain that he would be as surprised as I was. But of course, he was not. Carefully he explained to me that life is everywhere, hidden in the most ordinary and unlikely places. I was delighted. "And all it needs is water, Grandpa?" I asked him. Gently he touched me on the top of my head. "No, Neshume-le," he said. "All it needs is your faithfulness."

This was perhaps my first lesson in the power of service, but I did not understand it in this way then. My grandfather would not have used these words. He would have said that we need to remember to bless the life around us and the life within us. He would have said when we remember we can bless life, we can repair the world.

Rachel Naomi Remen is a best-author of many books. Excert above is from her book, My Grandfather's Blessings.

SEED QUESTIONS FOR REFLECTION: How do you relate to the notion that all life needs is our faithfulness? Can you share a personal story of a time you felt the world repairing when you remembered to bless life? What helps you remember to bless the life around you and within you?

A Hibiscus that was a gift from my best friend who recently died. It had been placed in the garden where squirrels nibbled all the leaves off. I put it in a different location thinking I should just throw it out. In frustration of the destruction of my gift. From one I considered gone. One day after ignoring the plant I checked it only to see tiny leaves sprouting from every stem. I did not have faith in the strength of the Hibiscus.

Things which look impossible, becomes possible if there is faith. Faith can do anything.
In 2021, i had gone through a lot of health issues and this continued for 6 months. I was living a healthy life, eating healthy food. I took allopathic, ayurvedic medicines. None of them suited me. Then one night, i had a minor heart attack and then i said to myself, this I don't want. So much of health issues, i cannot take. In just 1week or 10days,just by raising my consciousness, i came out of all the health problems. I was perfectly fine.

This repaired my life, since then i have i gathered faith and strength that everything is within me. This reminds me to bless my life and the people around.

Holding faith when all seems hopeless and dark is trusting in the power of spirit to embrace all that is and show up by telling the truth, discerning what I am called to do and how to be, and releasing that which is out of my control. As a grandfather now, I am reminded whenever I am with my grandson Hudson of how to live each day with the fresh eyes of a child and the heart of an elder who calls upon the wisdom of my ancestors.

"Repairing the world" is such a tenderhearted mission. This little action coupled with powerful consistency produces life giving mystery. It is such a lovely and true story. How confounded we are by the responsibility of doing things we don't want to do...What can compel us to keep doing these things? What hope do we need to have? For now, as I start most days, in the quiet moments I wait to see if someone comes to mind. If or when they do, I reach out then - maybe it's just a text or call or email. Something to check in with their hearts. Perhaps this is my little watering of the dirt cup.

Ah -- how beautiful: "we need to remember to bless the life around us and the life within us." Especially if you live on the 6th floor in a big city. The life energy is everywhere.

Thank you, thank you for this heartfelt and beautiful story. I love these words......'when we remember we can bless life, we can repair the world."

What a wonderful and powerful way to experience faithfulness and the power of Service!! Learning to have faith even when all we can see is the dirt and trusting that leaves will sprout at the right time if we continue to water is a beautiful reminder in trust, faith and perseverance. Thank you.

Thank you for this gift. Your grandfather across time and space seems to have given me a gift too through you.
The Gift is a gentle reminder to persevere.

When we show-up to be present to the life around and within us we are both blessees and blessers. The reciprocity of entering a dialogue with the natural world after we cleared land to build a new home made room for the plants that had been here to seed themselves once more. I now have baby trees coming up all over the property. I invited them back to heal the earth from my intrusion; to reclaim the open spaces with lush green life. Being faithfully and lovingly present even in interspecies relationships can amaze one with the miracle of new life.

What a beautiful way to teach the power of commitment and action. That believing in something and constancy matter in and of themselves. Beautiful!

So many important messages in this lovely story, particularly at this time of year when consumerism runs rife, the simple things are often the best: relationships, nature and nurture.

This story brought chills, tears and hope. My son is 26 and he told his girlfriend he does not want her to rush around all over town to buy Christmas gifts for him and he no longer wishes to go to her family home because the pressure of these gifts is more disturbing to him than the joy of being with loved ones just because we enjoy being with them. I do not say I agree with his viewpoint, although there were many winters when I have agreed with it. There are many sides to giving and to a gift. To have a wise grandfather take the care and attention to helping his granddaughter experience how life works through attending to a watering dirt is a precious gift that I have now received from this author.

I love Rachel's books - the stories are deeply heart warming and healing. This story could be about any spiritual practice - all it need is our faithfulness.

I loved this piece. Such a wonderful way to teach the importance of faithfulness even when something looks like a waste of time or hopeless or silly.

Beautiful! I loved this one so much, because I believe there are seeds all around us in the world, and that all they take to sprout and grow, is for us to care, with beauty and determination in our work and actions, because we have faith that the more beautiful world is there, waiting to sprout. Cheers to watering our cups of soil!

To bless means to recognize and honor the sacredness of something. I believe life needs more than faithfulness. Life needs the circumstances that support it. For example, valuing and supporting the expression of God called the person to whom I was relating blessed that individual, and in so doing I witnessed what appeared to be the person repairing. What helps me remember to bless the life around me and within me is knowing that all creation is sacred, so it only makes sense to bless life, and blessing life is satisfying to me.

Blessing life is the most effective way of creating and nurturinglife in all forms-human and natural. There are times when relationships thin out or break up. Giving unconditional love from the heartbased on the foundation of faith repairs and heals our fragile relationships. Several years ago I had an agonizing and depressive experience in my life. It was a heart-breaking experience. It took time for me to recover from it. My deep faith in the goodness of heart helped meemerge fromthe hurting heart to the healing heart. It was a transforming experiencefor me.

The best teacher is within ourselves. What we need is calmness,patience, empathy, compassion and above all faithfulness. Life offers many opportunitiesfor working on ourselves to repair and heal our relationships. It is a daily metta, loving kindness practice that heals me and others. It is blessing from the heart.
May we relate to us and others with the loving light of faith and kindness!
Namaste!
Jagdish P Dave'[Hide Full Comment]