Kazoo Player And The Symphony 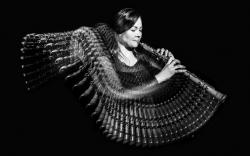 Imagine there is a great symphony orchestra in a great concert hall and in front of it, like an absurd comedy act, sits a clearly nervous kazoo player with no music score in front of him. The orchestral introduction begins, and the poor kazoo player, who has no idea what piece will be played, tries to give his best rendition of the orchestra’s chosen symphony. He is about a half a second behind them, playing the notes just after he hears them. As he is a kazoo player, he can only play one note at a time, so his impression of the orchestra is a very crude one, hitting on selected highlights of the melody, making for a very small and very simple version of the rich and intricate multipart score of the symphony that this orchestra is playing beautifully in all its glory.

Now, imagine that certain audience members have been cursed to believe that they can only hear the symphony after the kazoo player plays his rendition of it. Beginning meditators are nearly all thusly cursed. We observe like the kazoo player, and eventually we get good at noticing, to hang on to the notes of the kazoo player, delighting in his performance, as crude, linear, and simple as it is.

Soon, some of us concert-goers are going to begin to find the kazoo player silly, like some sort of joke that ruins the majesty of the symphony as it is.

Finally, imagine that someone suddenly puts the music in front of the kazoo player, such that he joins the symphony, becomes just one more part of the grand sweep of the melody, largely lost amidst the grandeur of the hundreds of other players all giving it their all. [Our awakening] is like that, in that we finally are just caught up in the performance, without having to feel like we need some poor kazoo player to interpret and imitate the symphony for us, and definitely without having to feel like we have to be up on stage being the kazoo player ourselves.

Daniel Ingram is a meditation teacher, and the excerpt above is from his book, Mastering the Core Teaching of the Buddha.

SEED QUESTIONS FOR REFLECTION: How do you relate to the author's metaphor of awakening to the grand sweep of the melody? Can you share a personal story of a time you felt you could hear the symphony beyond your kazoo player? What helps you reconcile the need of a kazoo player with the bigger majesty that is all around you?

“… without having to feel like we need some poor kazoo player to interpret and imitate the symphony for us,”

Not having read the book, I took the metaphor as a suggestion to not become overly invested in any particular guru or teacher’s philosophy of life and world, but to always measure it against one’s own immediate experience.

In the meditation, in the beginning there is a noise or traffic of one's own thoughts which maybe initially disturbing, but with practice, one learns to observe them without being one with them, eventually as the practice gets deeper, these thoughts becomes few and one is in this ' no thoughts' space even if for a while. To me, this space of no thoughts is the bigger symphony. Pseudo-self with its thoughts is the kazoo player. To go to that 'no thoughts' space, initially one has to observe one's own thoughts without evaluating or judging much like birds coming in and out of a tree or clouds passing past vast sky. Going past the microcosm to be part of macrocosm...

The artist works with a concentration of his whole personality, and the conscious part of it resolves conflicts, organized memories, and prevents him from trying to walk in two directions at the same time.

My first thought was that I don't relate to the metaphor, and I thought of Nietzsche's saying "And those who were dancing were thought to be insane by those who could not hear the music," which quote I can relate to and even like to relate to. My second thought was that I don't want to be one part of the grand sweep of the melody, largely lost among the grandeur of the hundreds of other players. My third thought is that I want it all, that is, I want to be my own unique individual kazoo player and be part of the grand sweep. Sometimes in a close present encounter with another, I hear the symphony beyond the kazoo player, and while connected to the kazoo player I also feel connected to the symphony with a sense that the symphony is larger than us, it takes priority, and we are part of the bigger majesty of the symphony, and it is very special.