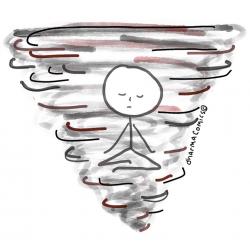 “Give me a place to stand on," said the Greek mathematician Archimedes, “and I can move the world.” He was talking about his invention of using pulleys and levers to raise very heavy objects. A physicist, engineer, inventor, and astronomer as well, Archimedes revolutionized geometry and anticipated Integral Calculus 2,000 years before Newton and Leibniz. But he was also a practical man who invented a wide variety of machines.

In the simplest sense, his statement is also true of our inner world of moods. When I feel anger, depression or any violent reaction coming on, I could look for a position on which I can take a stand while the storm passes through me. If I could leverage my inner world out of its momentary negative hell and back to ease and contentment, what a relief that would be!

The problem is, of course, how? Once a mood has reached its full flow of expression, it’s almost impossible to change the direction of the energy that’s pouring out of me. It has to play itself out, even if it leaves me aching, exhausted and, perhaps, apologetic. But here’s where leveraging comes in: if I can bring conscious awareness to the negative reaction early enough, before it begins to take me over, and if I care enough not to waste myself on it, there’s hope. The trick is to apply leverage before that small complaining stream becomes a raging river. That way, there’s a good chance I can escape the worst of it.

Not that it’s easy. For one thing, I have to sacrifice the positive enjoyment of being angry. Most people actually love to be angry. It gives them a sense of really being there, a kind of negative “I am.” In a perverse way they feel fired up: “Look at me now! I’m enormous when I’m in a rage!” And of course there are many other negative emotions we cling to in different ways. For example, all of us are prone to being victims of self-pity, which cuts us off from our energy as it is sucked into a black hole of despair.

If we understood better the value of the energy that’s wasted, we’d be more determined to leverage bad moods into good ones. Every morning we are given enough for the day, both the jet fuel of spirit and the ordinary psycho-physical gasoline that keeps our vehicle going. However, any violent outburst or negative feeling state I allow myself to affirm will lay waste to it. Gurdjieff said that a big burst of negativity can wipe out a whole day’s energy and, if the eruption is strong enough, one could be depleted for a week, a year or even the rest of one’s life. Ominous thought!

When you go to the gym or prepare for a serious run, you probably do a little stretching first. Your muscles need warming up and you take time out for that. How about exercising your psychic musculature to develop a subtler awareness of moods and flashpoints in order to be ready to leverage yourself out of your day’s portion of negative emotions. Bad temper, impatience, irritation, despondency are habitual negative reactions that could be replaced with more positive feelings, but it’s not easy.

Seed questions for reflection: How do you relate to the notion of leveraging your inner world out of its momentary negative hell and back to ease and contentment? Can you share a personal story of a time you were able to do that? What practice helps you exercise your psychic musculature to develop a subtler awareness?

Every week, we send out a digest with a reading and inspiring stories to our global community of 93,092 people. Subscribe below.