One February Morning in Vietnam 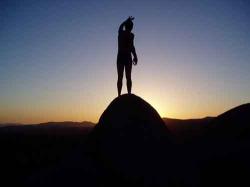 It was another morning in Chu Lai, Vietnam -- a large and ugly army base where I was.  One February morning, as I avoided the mud puddles in my morning duty, I found myself standing on top of a drive-up ramp.

Looking through the mists toward distant purple mountains, I suddenly became aware that I WAS those mountains and they were me. The now perfect little mud puddles were as much me as my fingers. The olive drab trucks, the concertina wire, the things that had always possessed a negative connotation in my mind were simply ... man's folly!
Another GI, whom I barely knew, walked across the compound and I experienced a love beyond words  for him, a realization that he was me wearing his own personal disguise. I was immersed in this joy that I had never even heard of -- no separation from anything or anyone, no judgment of the world around me. Later, when I attempted to explain what I'd experienced with words, the only word that came close was one-ness.
Less than 2 weeks later, I was at LZ Bronco and was looking through a meager dozen or so collection of books left by earlier tenants and I saw this curious title, "The Book ... on the Taboo Against Knowing Who You Are" by Alan Watts. When he began describing the experience I recently had, it triggered the experience again, only this time as I immediately tried to hold on to it, to keep it, it dissolved, like quick-silver through my fingers.
A few months later, as I prepared to return "to the world" -- America -- I thought, "Okay, I now know some important truths.  Life will be easier, more simple." Instead, it has become more challenging than ever.  But those experiences changed this Southern Baptist bred Okie for life. I am thankful every day for the grace that I received that February morning along with the realization that this beautiful state of being belongs to every single being of every color, culture or persuasion on earth.
Although I have pursued, even lusted after the Oneness experience I'd had, like a donkey chasing a carrot on a stick, I have slowly and painfully come to realize that only through knowing and then having the compassion to love myself just as I am and accepting completely this wonderfully terrible world just as it is, will I be able to open my heart to the state that is always there, that makes the pain and the fear of self-discovery so worth the journey I'm on.
--Eugene Hilderbrandt

SEED QUESTIONS FOR REFLECTION: What do you make of the author's likening a seeker's seeking of oneness to a donkey chasing a carrot on a stick? How does your own seeking feel to you? Can you share a personal experience when you completely accepted this "wonderfully terrible world just as it is"?

How does your own seeking feel to you?…..The very desire to look for the experience can be a deterrent. To ignore the search and tTo be in the present appears to be a better approach. This requires the ability to love the present moment, no matter what it is, at all times. This can happen only when both our conscious and the subconscious are clear. When this habit becomes spontaneous, hopefully before death, there will be the experience of oneness, if not it could be after death :) ………………..


Can you share a personal experience when you completely accepted this "wonderfully terrible world just as it is"?……I have not had the experience of ‘the Bliss’ of one-ness, yet. I am working on it. It is still a carrot. The ‘wonderfully terrible’ world can be a ‘terrible’ from ego-centered perspective and ‘wonderful’ from a ‘nature-centered’ perspective.[Hide Full Comment]

To Leslie Nazereth.  Perhaps that feeling that you have read a work of fantasy might be tempered by having large calibre rounds go wizzing by your head so close that you could feel the heat?  State of perception?  With respect I would ask how did you miss the core element here? Read it less as an intellectual and more so as one who is lucky enough to have not experienced the horrors of war.  Mr. Hilderbrandt's perception is born of that instant when clarity is revealed in such a way as to prevent one from ever returning to that other perception colored by our enculteration.

I do not believe the world to be "terrible" but definitely believe to be "wonderful"  to get a chance for redemption. It is said "world is your own echo" and "what goes around comes around". With this understanding if you follow Adjust everywhere and what has happened is correct. With this one can feel oneness with every living beings. Once oneness is felt all the interactions are resolves amicably.

For those who have had the honor of knowing Mr. Hilderbrandt, I can only say that it has been a priviledge to call him a friend. His insight and gentle nature have been an inspiration to me and to many others who find this world a much less compassionate place than we would wish.  I encourage Eugene to continue to write as he has a rare gift that is muchly needed.  My hat is off to you Eugene and always will be.

Yes, I still find myself (often times) pursuing that experience and feel like I am just running around in circles and it's just my trail that I am chasing. But then some times, I stop trying to chase it and just live the life I am given and instead try to welcome the opportunities that life presents I live that experience. Both experiences bring about a new lesson and has its own joys.

That Alan Watts book, "On the Taboo...." was my gift to my son as he went off to study at Cal Tech. Indeed it can shift one's perception in a most profound way.

Oh, yes, I have known what Eugene wonderfully describes. During an encounter group in the 70s, I awakened to this awareness of full connectedness to everything. This amazingly lasted for a wonderful month and has changed me for life. I never thought of it like the donkey analogy but it does fit in a very positive way.

On Wednesdays it has been very helpful to read a piece with a clear message that anyone can connect with even when translated to local languages. However, sometimes I have felt the pieces have been complicated and ambiguous and therefore impossible to translate so I felt sorry for not having said something in advance. This time I would like to post a comment.

However powerful and real the experience may have been to the author, this reading just leaves one feeling like one has heard a story that could be a mere fantasy. This is perhaps because it has been separated from its context in a larger piece. The part that is included here does not properly set the stage for the final paragraph. It could therefore invite intellectual reverie about a state of perception rather than core thoughts about one's state of Being.

With gratitude and warm wishes to all who make this sharing possible,

My desire not to desire is a much like the author's likening a seekers seeking of oneness to a donkey chasing a carrot on a stick. I'm getting more comfortable with seeking yet I frequently think, as some wise person already said: "that which I am looking for is that which is looking." I don't think I have ever experienced completely accepting this "wonderfully terrible world just as it is." I still make a distinction between intellect, will, and the rest of me. I accept this oneness intellectually, and sometimes when I am compassionate to self and others I accept it more fully, but I have a difficult time experiencing total acceptance of anything. Thanks for the opportunity to respond. Warm and kind regards to everyone.