Heart Is Not About Emotions 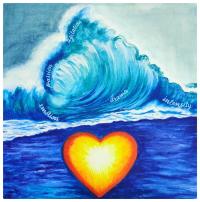 "Put the mind in the heart." From page after page in the Philokalia, that hallowed collection of spiritual writings from the Christian East, this same refrain emerges. It is striking in both its insistence and its specificity. As this ancient teaching falls on contemporary ears, it is inevitably heard through a modern filter that does not serve it well. In our own times the word “heart” has come to be associated primarily with the emotions (as opposed to the mental operations of the mind), and so the instruction will be inevitably heard as “get out of your mind and into your emotions” -- which is, alas, pretty close to 180 degrees from what the instruction is actually saying.

Yes, it is certainly true that the heart’s native language is affectivity—perception through deep feelingness. But it may come as a shock to contemporary seekers to learn that the things we nowadays identify with the feeling life—passion, drama, intensity, compelling emotion—are qualities that in the ancient anatomical treatises were associated not with the heart but with the liver! They are signs of agitation and turbidity (an excess of bile!) rather than authentic feelingness. In fact, they are traditionally seen as the roadblocks to the authentic feeling life, the saboteurs that steal its energy and distort its true nature.

And so before we can even begin to unlock the wisdom of these ancient texts, we need to gently set aside our contemporary fascination with emotivity as the royal road to spiritual authenticity and return to the classic understanding from which these teachings emerge, which features the heart in a far more spacious and luminous role.

According to the great wisdom traditions of the West (Christian, Jewish, Islamic), the heart is first and foremost an organ of spiritual perception. Its primary function is to look beyond the obvious, the boundaried surface of things, and see into a deeper reality, emerging from some unknown profundity, which plays lightly upon the surface of this life without being caught there: a world where meaning, insight, and clarity come together in a whole different way. Saint Paul talked about this other kind of perceptivity with the term “faith” (“Faith is the substance of things hoped for, the evidence of things not seen”), but the word “faith” is itself often misunderstood by the linear mind. What it really designates is not a leaping into the dark (as so often misconstrued) but a subtle seeing in the dark, a kind of spiritual night vision that allows one to see with inner certainty that the elusive golden thread glimpsed from within actually does lead somewhere.

Cynthia Bourgeault is an Episcopal priest, teacher, and retreat leader. Among her many books are The Meaning of Mary Magdalene and The Holy Trinity and the Law of Three.  Excerpt above is adapted from this article.

SEED QUESTIONS FOR REFLECTION: How do you relate to the notion that the heart is not about emotions, but a space for a deeper spiritual perception? Can you share an experience of a time you gave primacy to a deeper perception over surface-level emotions? What helps you avoid the roadblocks to 'the authentic feeling life'?

Only the heart can truly hear, and it is in silence and solitude that this is most possible. }:- a.m.

The mind is in us, in the whole. It's we who say the mind is in the brain. Passion, and the liver, are valuable and important in staying alive. Faith ishaving passion about what is seen with the soul's eye. The heart represents deeper spiritual perception. My deeper spiritual perception is that I ammore than my experiencing, feeling and thinking. When I give primacy to this deeper perception over surface level emotions, I use more of my whole self and more likely do what is best for me and others. For example, I made a life path change long ago based on perception that was deeper than emotions and thinking. What helps me is when I live what Ronald Laing said, that is, "What we think is less than what we know; what we know is less than what we love; what we love is so much less than what there is. And to that precise extent we are so much less than what we are."

I experience such DivineRelationship with nature and with my family and friends and even with strangers when my mind is quiet and clear and my heart is filled with unconditional love. In such moments i feel deeply connected and sense the feeling of oneness. This is an example of a deeper spiritual perception.

Regular practice of mindfulness meditation and loving Kindness-meta- meditationand remaining mindful of my thoughts, feelings, emotionsand my actions help me walk on this path of spiritual living. Listening to devotional songs and serving others selflessly are very helpful to me abide in my heart. This the way I relate to the author's wise words " Heart Is Not About Emotions."
Namaste!
Jagdish P Dave'