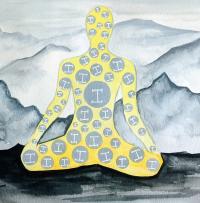 You may object to the idea that your sense of being a self is a mere construct. After all, it feels very real. How can we reconcile this powerful sense of self with the idea that we're just a collection of sub-minds? Meditation is all about investigating your actual experience, so I invite you to notice how, when something happens, the "I" gets imputed only after the fact.

Say a memory comes up as you're walking with a friend. Notice how it's only after the memory arises that you turn to your friend and say, "I just remembered something." Or consider how an emotion like sadness can be present long before the thought "I feel sad" arises. In each example, and in almost every other experience, what gets attributed (after the fact) to the "I" is actually the activity of various sub-minds. To make this even clearer, consider what happens when we face a dilemma or have a difficult decision to make. You'll discover that, here as well, the "I" arrives on the scene only after the conflict has arisen. Then, as the conflict continues, the "I" seems to fret as various thoughts and feelings arise from different sub-minds in support of one option or another. Even after a decision has apparently been reached, the "l" might still experience doubt or hesitation if some sub-minds aren't convinced. But sooner or later, seemingly from nowhere, a firm decision arises.

That "nowhere" is none other than the unconscious mind; the decision was made by the collective interaction of some of those unconscious sub-minds. After the conflict has been resolved comes the thought, "I have decided." In all these situations, the narrating mind just takes the ongoing flow of information in consciousness and organizes it into a meaningful story, attributing everything to the imaginary entity called "I." The discriminating mind then mistakes this "I" for an actual individual, rather than a product created by a collection of sub-minds.

It's as if a room full of people all named George were having a debate, but all you received were reports that "George said this" and "George said that." Like the unconscious discriminating mind receiving information from the narrating mind, you would probably mistake the group for a single, very conflicted individual named "George." "Your" decisions, and any subsequent intentions and actions, don't originate from some Self. They are the result of a consensus among many unconscious sub-minds exchanging information via the conscious mind.

The excerpt above is from the book 'The Mind Illuminated'.

SEED QUESTIONS FOR REFLECTION: How do you relate to the notion that our 'discriminating minds' mistakenly attribute 'I' to an individual instead of 'a product created by a collection of sub-minds'? Can you share an experience of a time you became aware of unconscious sub-minds exchanging information via the conscious mind? What helps you be aware of how you are attributing 'I'?

Having struggled with decision making/choices most of my life, this makes a lot of sense. Having experienced consensus recently in a team I work with, gives me hope that what is happening around me, is happening within as well. Thanks for sharing.

When I need to or want to make an important decision about what to chooseI do not act impulsively or by my habitual patterns of rushing without pausing. From my experienceof such actions I have learned not to be controlled by the voices of unconscious sub-minds. This way of making wise choices is an ongoing process. It is worth doing to prevent or avoid myself from falling into a pit of suffering.

The light of awareness helps me when i am moving toward the dark zone-the wrong zone. When I am aware of what is going on in my mind and refrain myself from doing harm to me and to others, my action becomes a blessing to me and to others connected with me. Mindful actions bring blessings and prevent curses.
Namaste!
Jagdish P Dave'

My relation to the notion stated is one of disagreement. My understanding of author Yates' essay is that he objects to attributing ideas, memories, and discoveries to the conscious construct "mind," so he posits a sub-layer of constructs called sub-minds that are unconscious and he attributes the ideas, memories and discoveries to them, and they feed the conscious mind. I believe the source of my conscious mind is what I call my soul, which is God, the Source, of which my body and mind are temporal manifestations. I believe the information, ideas, memories, and discoveries attributed to the conscious construct "mind" emerge or download from the soul/God Source which is primarily unconscious. I haven't experienced soul/God, if I may use my term, providing information via the conscious mind -- maybe a semi-experience -- I believe it. What helps me be aware of how I am attributing "I" is openness to there being something beyond body and mind.