We Are Between Stories 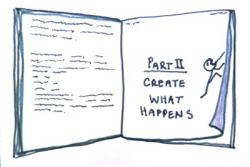 We live in an exciting time. As cultural historian, Thomas Berry put it: "We are between stories." The old story -- bracketed on the one side by reductionist scientific materialism, and on the other by institutional religious dogmas -- is no longer able to guide us toward human or planetary flourishing. Instead, the chasms created by both science and religion, and the various social philosophies they spawned, are implicated in pushing us toward the precipitous edge upon which we now stand. At this edge we see both breakdowns and breakthroughs.

While the story of scientific materialism has been part of our evolutionary journey, it has created a map of reality -- a worldview -- that de-legitimized a vast portion of wisdom and experience. It placed reason over intuition, intellect over emotion, material over spiritual, objectivity over subjectivity, exteriority over interiority, and condensed this into a story that we live in a mechanistic, material world that can only be known through objective and measurable observation in which human reason reigns supreme.
Institutionalized religion upheld a story that gave male authority figures the power to interpret and mediate purported divine laws and construct theological justifications for power over women, children, the natural world, and non-believers. While scientific and religious stories were at odds with each other, both saw it in their interests to label metaphysical or spiritual worldviews outside their boundaries as heresy, superstition or witchcraft.
Yet ironically, science itself has now begun to step into the realm of the mystics. The "new sciences" story finds biologists and neuroscientists astounded by the hitherto unstudied capacities of the human brain and heart, indicating our ability to intentionally amplify love and compassion. It finds psychologists exploring the territory of contemplatives and revealing a map of human consciousness far beyond the individual ego-self. It finds physicists discovering that the presumed separation of observed and observer doesn’t exist. Much like the African worldview of Ubuntu -- “I am because you are” – all things exists as a communion of subjects, not an assortment of objects.
The new story frames the human journey, not within the context of tribes or nations, but embedded in a constantly evolving planet and cosmos, interconnected and interdependent at every level. The implications of this framing could signal dramatic changes in every field of human endeavor.
The trends we are seeing within restorative justice, reconciliation, transitional justice, dialogue and other forms of peace practice, are evidence of new ways of addressing human conflict that are moving beyond the old dichotomies. We have chosen to name this trend social healing partly because we see an evolving paradigm that is not fundamentally hinged around the dualities of good vs. bad and right vs. wrong, but is rather inclined toward viewing human conflict through the lens of wounding and healing. Social healing, then, is not guided by revenge, retribution or punishment, but rather by the compassionate response of relating to all people -- victims, transgressors and bystanders alike – as inextricably connected.
--Judith Thompson, in Social Healing Project report

Every week, we send out a digest with a reading and inspiring stories to our global community of 93,188 people. Subscribe below.