Difference Between Eah and Oh! 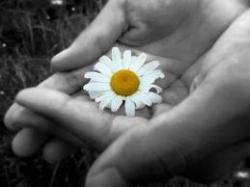 After walking some distance, stopping for a cup of tea, and winding my way back to the apartment, I happened upon an older, homeless man in an alley. He was surrounded by several overstuffed plastic bags, and had apparently spent the night in the alley.
When our eyes met, we held the moment for an unusually long time. I held the gaze longer than usual, hoping he might ask for money — but he did not. His sad, sweet eyes unexpectedly brought tears to my own. I continued walking as I spontaneously said a little prayer for him. As I continued on my way, feeling his sadness, I looked up and was startled to see a well-dressed woman staring at me in a most intense and compassionate way. She smiled enthusiastically when our eyes met, perhaps thinking it was my own sadness I held. I walked on.
Several blocks down the street, as I neared a storefront, I spotted a young man in his late teens just getting up from his pile of dirty blankets. He, too, had spent the night on the street. He looked so young and vulnerable as he tried to pull his shirtsleeves down over his cold hands. As I passed, he looked at me and smiled. I slowed, but he didn't ask for anything either. I came home unable to shake the feeling of sadness for these men and for the imbalance in our world. Yet, all I felt I could do was hold the sadness I was feeling in a reverent, prayerful way. From past experience I know, and have come to trust, this way of holding others. When no other action is called for, this emotional embrace, in itself, can be a gift.
To many, non-action in a situation like this may not make sense. However, sometimes literal "giving" can be a way to avoid the weight of another's burden. The spirit of the moment can ask something different of us, something different from our ideas of what it means to give. Reverently holding the suffering of others can be a moment's greatest offering, and it is a moment many of us often avoid by trying to buy our way out with literal acts of goodness. When one sees the activity of this holding as a formless act of compassion, one goes about it with reverence. Where literal action fails, reverent generosity succeeds by becoming a container able to hold the tears of the world.
The delicate refinement of reverent generosity is one of the loftiest disciplines of embodied life. Reverence is the only appropriate response to the mystery by which we are are surrounded. It requires unrelenting attention. Lao Tsu said, " How great the difference between 'eah' and 'oh!'" The "eah" response to life represents an attitude of indifference, while the "oh!" response represents openness and surprise in the face of an awesome and mysterious universe. One's natural impulse to inspire others with that emotion which reverence has awakened in one's own heart creates sublime beauty in the world. With reverence, the difficulties in life become grist for the mill. Chaos, hopelessness, suffering, even death—everything may be placed on the altar for transformation in the eternal. What comes through may be a sweet word, a gift, a joke, wisdom, or even the use of the sword; inspiration finds a way to undo the illusion of limitation. Inspiration enters the heart through the portal of reverence. With inspiration rippling through the collective, the heart of the world grows unalterably stronger.
--Jerry Wennstrom, in Reverant Generosity