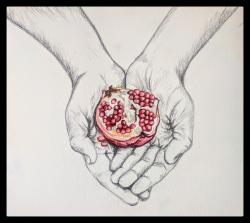 Early one morning, the Buddha and his disciples set off on an alms round. He announced that on that day all of the offerings they received would be given to the poor.

The community sat beneath the red blossoms of a sala tree and waited. Soon all of the most important dignitaries from the surrounding area came to make offerings.

First to arrive was King Bimbisara. He offered lavish gifts of gold coins, gilded lanterns, and necklaces sparkling with precious gemstones. The Buddha accepted these offerings with one hand.

Next to arrive was Prince Ajatashatru. He extended offerings of intricate carvings, mouthwatering foods, and sticks of fragrant ox-head sandalwood incense. Again, the Buddha accepted these offerings with one hand.

These were followed by offerings from minor kings, brahmins, elders and laypeople. The Buddha accepted all of their offerings with a single hand.

Those gathered looked on in embarrassment at the old woman's meager offering. But the Buddha extended both of his hands and gratefully accepted the half a pomegranate.

When the old woman was gone, the Buddha's disciple Aniruddha asked, "Why did you accept the old woman's offering with both hands, but all of the others with only one hand?"

The Buddha replied, "This woman gave all she had without expecting reward. I needed both hands to accept such an abundant offering."

Brian Conroy is a story-teller. Excerpt above from his book, Stepping Stones.

Seed questions for reflection: How do you relate to the abundant offering of the old woman? Can you share a personal story of a time you either received such abundance or were able to tap into it yourself? What helps you tap into your deepest abundance?