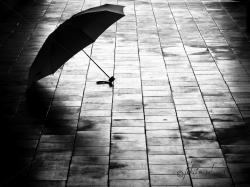 The rains failed again that year. It was the third year in succession when there was no rain. The crops had disappeared and the land was a brown swath of dusty rubble. Trees had lost their leaves years ago and stood out like silhouettes of cactus on the dusty horizon. There was a stream that skirted the village in years bygone. Now the riverbed was dry. Where once flowed clean, fresh water from the nearby mountains, there was now a bed of clay, cracked in a checkerboard pattern with gaps as wide as a foot.  No one knew what had happened to the birds except for the vultures that circled the town, looking for a carcass or two of an animal that was left dying.

There was famine in the land. People walked around like sticks, sans flesh, surviving on whatever ration was brought to them by various international charities.

Desperate for help, the people of the village held a meeting under a big banyan tree that was as old as the village. “Let us pray”, said an elderly woman. “Only God can help us now.”

There lived people of many faiths in the village and there ensued a big debate as to where to hold the prayer – in a church, a mosque, a synagogue  or a temple. There was no consensus. Exhausted, they decided to hold their prayer in the open, late that night, under the open sky, away from the town. It was a full moon night and the moon shone with its alluring brightness against a background of shimmering stars.

Amongst the people gathering for prayer a little girl holding hands with her young brother came running from a nearby village, holding high an open umbrella over their heads. Huffing for breath, they stood there, looking up, umbrella still unfurled. The gathered crowd could not but help turn around and wonder what was going on.  Some were curious; others were annoyed and some others were even furious as they kept being poked by the spokes of the umbrella.

Finally a curious bystander asked, “Why did you bring the umbrella?  Can’t you see there is no rain and we have come here to pray for rain?  Only a foolish person would stand on a clear night like this with an open umbrella.”

“Yes  indeed”, chimed in the two young siblings. “We came to pray too. We are certain that our prayer will be answered and it will rain. That is why we brought this big, colorful umbrella.”

Adapted from The Child who Brought an Open Umbrella for Prayer  by Nazeer Ahmed.

Every week, we send out a digest with a reading and inspiring stories to our global community of 93,140 people. Subscribe below.