Reflections on Life from Death Row 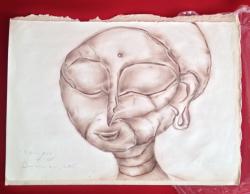 Reggie once told me that we could use these cells like meditation cells used by monks in monasteries.

But prison is not a monastery. And although I may do my best to take advantage of the opportunities I have for genuine practice in the confines of this cell, to lose touch with what the cell is intended for would be a mistake.

It would first be me not seeing things for what they are which is something that my practice encourages me to do at all times: to see things correctly.

It would also not serve my commitment to raising awareness on the inhumanity and destructiveness of the solitary cell. I'm committed to helping keep this conversation going till we see some change.

***
Funny how the thing set to kill you is the thing you use to heal you. The solitary cell is the best sparring partner for the prisoner it holds. It is the best guru, the best teacher.

Strange, I know, but it is true.

I have learned to wait this cell out with the patience it has enforced on me. I no longer scream out in agony in the grip of the cell’s silence.

I know that if someone came out of here after four decades, I should be doing fine in my decade and half. I’m just getting warmed up.

But so is this cell.

I don’t expect to ever be let out of solitary confinement alive.

I could die next year, I could die this year. I don’t sense an overwhelming anxiety about this.

What I am most concerned with is spending my time in worthy ways. What bothers me is that I am a waste to others here. In the movie The Matrix, humans still served some purpose. They were fuel! Here, my purpose is none.

Stick me in front of a camera and let me talk to some at-risk kids. Teach me to knit so I can make some blankets for the homeless. Let me donate some blood or some organs!

I am a healthy male. When I am executed, I won’t be able to donate any of my organs because at that point they will be ruined by the chemicals [...].

---------------------------------------------------------------------------------------------------------------------    At the age of 18, Moyo killed two people. He was sentenced to death and for the past fifteen years, he has been held in solitary confinement on Death Row. There, in his own words, he is working to “polish his soul, clean stains from his heart, and open windows of his mind.” Locked inside a cell smaller than a parking spot, Moyo began a quest of self-discovery. In an effort to understand and reclaim his own narrative, he became an avid reader, delving into books on black history, art, the justice system, psychology, spiritual texts, fiction and more. He began making art as a means to explore his own experiences and emotions. Deprived of nearly every form of social interaction, he began to communicate with people in the outside world through letters. Once, from a neighboring cage in the recreation yard, a fellow inmate introduced Moyo to yoga and meditation. In the years that followed, Moyo committed himself to a regular practice. Moyo (Swahili for heart / spirit) is a brush name adopted by the artist.

The above content is excerpted from Buddhas on Death Row, a project that brings to light a profound journey unfolding in the darkest of places, and a testament to the power of art, inner cultivation, and friendship. The above image is a color pencil sketch on paper by Moyo, titled "Company".

Seed questions for reflection: How do you relate to staying open to the potential of the present moment while at the same time accepting its reality? Can you share an experience of a time where you saw things correctly while also participating in being the change? How do you develop the ability to face the reality of difficult situations while also staying rooted in the full potential that you embody?