In Praise of Idleness 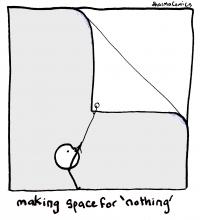 Like most of my generation, I was brought up on the saying: 'Satan finds some mischief for idle hands to do.' Being a highly virtuous child, I believed all that I was told, and acquired a conscience which has kept me working hard down to the present moment. But although my conscience has controlled my actions, my opinions have undergone a revolution. I think that there is far too much work done in the world, that immense harm is caused by the belief that work is virtuous, and that what needs to be preached in modern industrial countries is quite different from what always has been preached. [...]

It will be said that, while a little leisure is pleasant, men would not know how to fill their days if they had only four hours of work out of the twenty-four. In so far as this is true in the modern world, it is a condemnation of our civilization; it would not have been true at any earlier period. There was formerly a capacity for light-heartedness and play which has been to some extent inhibited by the cult of efficiency. The modern man thinks that everything ought to be done for the sake of something else, and never for its own sake. [...]

[Instead, in a world where there is adequate leisure,] above all, there will be happiness and joy of life, instead of frayed nerves, weariness, and dyspepsia. The work exacted will be enough to make leisure delightful, but not enough to produce exhaustion. Since men will not be tired in their spare time, they will not demand only such amusements as are passive and vapid. At least one per cent will probably devote the time not spent in professional work to pursuits of some public importance, and, since they will not depend upon these pursuits for their livelihood, their originality will be unhampered, and there will be no need to conform to the standards set by elderly pundits. But it is not only in these exceptional cases that the advantages of leisure will appear. Ordinary men and women, having the opportunity of a happy life, will become more kindly and less persecuting and less inclined to view others with suspicion. The taste for war will die out, partly for this reason, and partly because it will involve long and severe work for all. Good nature is, of all moral qualities, the one that the world needs most, and good nature is the result of ease and security, not of a life of arduous struggle.

Bertrand Russell (1872-1970) was a British philosopher, logician, mathematician, historian, social critic and political activist. At various points in his life he considered himself a liberal, a socialist, and a pacifist, but he also admitted that he had never been any of these in any profound sense.  This passage was excerpted from his essay, "In Praise of Idleness".

Seed questions for reflection: How do you relate to the author's thesis that originality springs forth when people do things that they are not required to do, but enjoy doing? Can you share a personal experience of a time that the harmfulness of hard work without any leisure became clear to you? How do you create a space for adequate leisure in your life?

Every week, we send out a digest with a reading and inspiring stories to our global community of 94,129 people. Subscribe below.