A Jugalbandhi (Duet) with Life 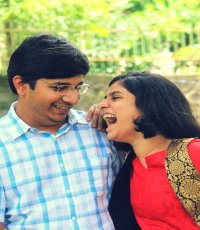 Both Mandar Karanjkar and Dakshayani Athalye were brought up on a steady diet of Indian classical music. Mandar was just six when he began accompanying his mother to harmonium classes and soon showed an interest in Hindustani vocals. In his late teens, he taught himself to play flute. Back in her Maharashtra hometown Ratnagiri, Dakshayani accompanied her mother to learn kirtans. By the time she was 10, she was performing in villages across the state. Despite having graduated with college degrees in engineering and law respectively, the duo found their calling in making Indian classical music accessible to the masses through their non profit Baithak Foundation. Through Baithak, Mandar and Dakshayani conduct music courses in three schools, including Pune Blind Girls School in Kothrud. Through their many-fronted initiatives, they take classical music to construction site kids and aangan-wadis (community centers for kids). Apart from Baithak, Mandar and Dakshayani conduct theme based musical performances on Meera, Nanak, Tukaram, Nirgun bhajans and such. Mandar also engages in a communication consultancy.

The duo has authored books : among others, Mandar has written about being deeply inspired by Kabir in The Kabir Way, - this latest work titled "Moments with a Master" as a tribute to his Guru Pandit Sardeshmukh. This couple has also co-authored a fictionalized account of their early days of togetherness in a Marathi novel, curiously titled after the mathematical constant Pi – the value of love. A persistent blogger, his blogs cover a wide canvas from his reflections on the Ashtavakra Geeta, J Krishnamurti, and of course, classical music.

Another eclectic volunteer couple Shaalini Srinivasan and Deven Shah will be in conversation with Dakshayani and Mandar, on Sunday March 7, 2021 at 10 am.

Can classical music shape a child's growth? How to align labour of love with right livelihood? Does naad (music) lead us to antar naad (inner music)?