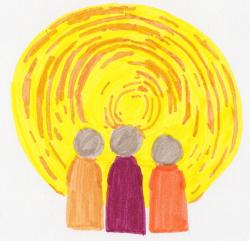 I am a mountain girl, and my first love in Asia are the monasteries tucked between the snow-covered razor ridges of the high Himalayas. But I've been drawn south into these humid lowlands by the reported kindness of the Laotian people and the early morning ritual that is about to begin.
A rooster crows. A peacock screams. And then the bells of the monasteries begin to have their morning conversation.
When the monks come pouring down the stone steps of the prayer halls, they appear first as a river of color, a ribbon of saffron silk, shockingly vibrant against the chalky streets, the dusty footpath, the gray -- almost mercuried -- sky. All over Asia, monks wear robes the color of spices: curry, cumin, paprika. In Luang Prabang, every robe is brightest saffron, the cloth wrapped complicatedly around their torsos and hanging to their ankles, tied at the waist with a bright yellow sash.
As they approach it becomes possible to distinguish one monk from another, hands clasped in front of the belly, echoing the shape of the wooden begging bowl they hold.
Like the Mekong they live beside, this river of men never stops moving; they pass in a quiet, contemplative gait that is two parts walking, one part floating. One by one they drift past the woman, who also keeps a kind of time with her motions: one large scoop of steaming rice into each hand-carved bowl, refill, release, refill again. Every monk bows to her deeply and moves on.
Every few streets the same thing is happening: different woman, different monks; same bright, graceful river passing in front of her. And again a few streets over, an unmistakable flash of color, and again, a few streets beyond that. This is what happens here every morning, 365 days, year in, year out.
The women up early, cooking in the dark, carrying their little tables in the milky first light. Then the monks, a small fire in the gray light, lightening their rice cookers, lightening their burdens.
The sun strengthens slightly. In an hour, the fog will lift and the heat will begin to press down. There is a flick of fire, a swirl of a saffron sleeve as a monk moves around the corner, back up the stairs and into the dormitory, like a magic trick of compassion, of generosity, of prayers offered and received.
--Pam Houston

Unity and diversity -- individuality and togetherness -- I/Thou -- different ways to say the same thing.  Not one, not two, but one and two.  We are unique and distinct individuals, and we are also one.  That is an incomprehensible mystery of life.  My understanding is that each of us, and every animal, plant, and thing, a zillion zillion different forms, is an expression of one Being.  Seeking unity through uniformity is really a low level of consciousness.  We learn to appreciate unity in diversity by becoming awakened to it and realizing it and abiding in it, and there is a sense of  calm in even beginning to do so.  My personal experience is having at least a small sense of appreciating that as I look across at the other I see me -- there is a sense of calm in that.

Growing up in a large metropolis one does not realize the many ways that others are reflecting the beautiful culture of  their ancestors. Sometimes I almost feel cheated although I do understand the 'different' hardships that go with being without.......but without what? I could easily give up most all materialistic things....at least having to own them. The profound connection that the people have with nature including each other is what I feel most at a loss in my life in my culture as an American.

The beauty that is so eloquently offered by Pam is like a lucid dream where every-thing moves at it's natural pace and the vivid colors just add to it's vibrancy, depth and texture.  For ones senses linger well past the last paragraph..... almost like coming Home.

When I look around in nature, I see a beautiful blend of diversity that is totally unified ... the shimmering aspen leaves merge with the wind ... moving river flowing into sky ... animals blending into the trees.

I've also experienced the joy of watching children playing, each a unique expression, laughing, shouting, even the occasional cry forming a unified symphony when I step back and watch the whole.

Thank you for this beautiful morning meditation.

Was fortunate to have witnessed the humility and grace in giving that Pam has described.
Though the event has become a tourist attraction,even the intrusive flashes of camera toting
crowds do not take away from the spirit of the ancient ritual.
Seeking alms was the way of the Bhhikkuu (Monk) from the days of Gautama the Buddha.
May it continue as long as the Mekong flows.

It all looks very lovely and peaceful so how is that such people (Buddhist monks) are slaughtering the Rohingya people in Myanmar, destroying their houses and mosques and forcing them out of the area into squalid refuge camps, denying them their human rights, denying that they have lived for centuries in that land and basically ethnically cleansing them? Why? Because they are of another race. What about unity in diversity there?

It is a practice in eastern parts of the world where monks / yogis / sadhakas / Boudha Bhikhsus/mendicants go for alms on day to basis without the intent of accumulation and spare them hassle / hindrance earning their livelihood to enable them to dedicate their energies & full time towards spiritual practices , gaining knowledge and meditation.
I personally experienced this benevolent practice, when as a teen I was wandering alone along the canal in interior Andhra Pradesh, an elderly unknown farmer took me to his house and his kin introduced me to their neighbours as their relative and offered the same sumptuous lunch they eat.    Their hospitality to a stranger despite of limited means of that house-hold has stumped me.   Still I remember those people,  especially the lady of the house as Annapurna, a goddess for bestowing the food for all.

Such day in and day out  graceful rituals  provide  us a rich experience of giving and receiving gifts silently from our hearts. Manyness in Oneness and Oneness in Manyness is experienced in our hearts and sustained by such wonderful traditions. Though I am in Phoenix, AZ, I feel connected with the people far away from me. Jagdish P Dave

Many are one.  Awareness of traps helps us avoid them.  When one is trapped, it is the one who is trapped who does the trapping.  Uniformity and diversity are in one's head; what one perceives.  Neither are right nor wrong.  About 35 years ago I was invited to a party with 40 or 50 people present.  I was the only white person.  I was honored to be a person with other persons regardless of skin color.  My mindset was much like the mindset of the others present.   I find it helpful to remind myself that that which I am looking for, is that which is looking.  When we are all one, differences are often more trivial rather than substantial.  Warm and kind regards.