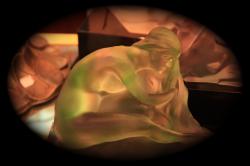 You may be spending most of your time in habitual tightening or  resisting of the sensations, but if you sit there long enough, every once in a while, just because of the impermanent nature of things, your resistance will lessen for a moment, just spontaneously. At that time you begin to make a correlation. Diminished "resistance" brings about diminished suffering. You literally train yourself out of the habit of suffering.

What you learn in this way with respect to pain of physical origin is immediately generalizable to pain of psychological origin. Suffering is a function of two variables: one's discomfort and one's habit of resisting that discomfort. […]

Therefore, there is nothing whatsoever to be said in favor of pain per se for meditators. It can just as much create new blockages as it can break up old ones. Everything depends on one's degree of skill in experiencing it. Very little depends on the intensity of the discomfort itself. A small discomfort greeted with a large amount of skill will break up old knots. A small discomfort greeted with a large lack of skill will create new knots. The same is true with respect to big discomforts. The trick is not so much to endure massive doses of pain, but to develop that skill which will allow you to get the maximum growth out of whatever happens to come up. […]

"Skill" with sensation means to be relatively more clearly aware of the sensation and relatively more accepting of the sensation than you would be otherwise. When a person greets a minor pain with great awareness and great acceptance, then it has a much more powerful growth effect than to greet a major pain with grudging endurance. This was nicely summarized by Thomas Merton. Merton was a Christian monk with a great appreciation of the Eastern meditative traditions -- not an uncommon combination nowadays. I'm paraphrasing, but somewhere I remember him saying something like "I did not become a monk to suffer more than other people, I became a monk to suffer more effectively."

--Shinzen Young, in an interview with Charles Tart

As i read these passages and the varied comments, i feel as if i am walking, hand in hand withmy fellow travellers.

it is a joyous walk.. Thanks everybody.

My family calls me Pancho and I'd like you to know that I love you all. Last week, I wasn't there --at the Kindness Temple-- to offer my (physical)presence but here are these three points that came through me:   1. Masochism or Conscious Pain? 2. Inner Independence 3. Walking with Dignity   1. Masochism or Conscious Pain? I have to say that I experienced a lot of discomfort when I read the phrase "learning to suffer more effectively" since from my point of view, cultivating a meaningful life is a life lived out of suffering. But then I remember Gandhi, the Jagannathans, Martin Luther King Jr. and many other beings who had sacrificed their lives for us. This is my attempt to break up the old knot ;-) and translate the meaning of their message:   "Nonviolence in its dynamic condition means conscious suffering.  It does not mean meek submission to the will of the evil-doer, but it means pitting one’s whol... [View Full Comment]

My family calls me Pancho and I'd like you to know that I love you all.

Last week, I wasn't there --at the Kindness Temple-- to offer my (physical)presence but here are these three points that came through me:


2. Inner Independence
3. Walking with Dignity
1. Masochism or Conscious Pain?
I have to say that I experienced a lot of discomfort when I read the phrase "learning to suffer more effectively" since from my point of view, cultivating a meaningful life is a life lived out of suffering. But then I remember Gandhi, the Jagannathans, Martin Luther King Jr. and many other beings who had sacrificed their lives for us. This is my attempt to break up the old knot ;-) and translate the meaning of their message:
"Nonviolence in its dynamic condition means conscious suffering.  It does not mean meek submission to the will of the evil-doer, but it means pitting one’s whole soul against the will of the tyrant.  Working under this law of our being, it is possible for a single individual to defy the whole might of an unjust empire to save her/his honor, her/his religion, her/his soul, and lay the foundation for that empire’s fall or its regeneration."--M.K. Gandhi

"I have come to this fundamental conclusion, that if you want something really important to be done you must not merely satisfy the reason, you must move the heart also.  The appeal to reason is more to the head, but the penetration of the heart comes from suffering.  It opens up the inner understanding in humans." --M.K. Gandhi
In Gandhi's approach to freedom, I would like to change --or translate-- the word suffering for pain. Through the cultivation of awareness we know that there is suffering in the world; there are causes for this suffering; cessation of craving and aversion is possible; and there is a way out of suffering by cultivating the path of love and truth. From my perspective, a satyagrahi knows that "voluntary pain" is not masochism but a way out of _collective_ suffering. It is a display of our collective empathy to honor our oneness in solidarity, not only with thoughts and words but also with actions. In this way voluntary simplicity, voluntary pain, conscious pain is redemptive.
I see Gandhi's example as one of many efforts to walk on the path of liberation. Why do we want to join a "voluntary pain" on the Earth Community? To awaken the hearts and consciousness of humanity.
2. Inner Independence
Silence and solitude are effective ways to achieve inner independence for they remind us that nobody can humiliate us without our permission; no one can control us without our consent. It is the foundation of the human spirit.
"The British were not made to suffer, instead we took suffering upon ourselves.  And in doing so, we ourselves were strengthened and changed, for we experienced an inner independence even before the British granted the outward one.  This is our great inheritance from Gandhi." --S. Jagannathan

"Prayer is the key of the morning and the bolt of the evening…. As food is necessary for the body, prayer is necessary for the soul…. No act of mine is done without prayer….  I am not a man of learning, but I humbly claim to be a man of prayer.  I am indifferent to the form.  Every man is a law unto himself in that respect…. [But] it is better in prayer to have a heart without words than words without a heart." --M.K. Gandhi

When we come to Wednesdays to be in receptive silence --some sort of Gandhi's prayer--, we cultivate and celebrate this inner independence. It is such a joyous sensation to be aware of this power that all humans possess. Our hearts without words connect in silence as ONE. That's why I _love_ Wednesdays! :-)
3. Walking with Dignity
"When I went to Montgomery, Alabama, as a pastor in 1954, I had not the slightest idea that I would later become involved in a crisis in which nonviolent resistance would be applicable.  After I had lived in the community about a year, the bus boycott began.  The Negro people of Montgomery, exhausted by the humiliating experiences that they had constantly faced on the buses, expressed in a massive act of noncooperation their determination to be free.  They came to see that it was ultimately more honorable to walk the streets in dignity than to ride the buses in humiliation."
"A fifth basic fact about the method of nonvlolent resistance is that it is based on the conviction that the universe is on the side of justice. It is this deep faith in the future that causes a nonviolent resister to accept suffering without retaliation. (S)He knows that in her/his struggle for justice she/he has cosmic companionship."
"At the beginning of the protest the people called on me to serve as their spokesman.  In accepting this responsibility my mind, consciously or unconsciously, was driven back to the Sermon of the Mount and the Gandhian method of nonviolent resistance.  This principle became the guiding light of our movement.  Christ furnished the spirit and motivation while Gandhi furnished the method." --Martin Luther King, Jr.
The physical pain of walking many kilometers was nothing in comparison with the joy of freedom and dignity.
When we share in voluntary pain our unity, when we join our hearts in silence, when we speak with our kind and courageous actions, we break away from the shackles of all violences to embrace another fearless step towards freedom and harmony on the Earth Community.
May all become compassionate, courageous and wise.

pain and plesure both are passing through life to teach life long learning, who evere take notice they know that its just a passing fase and not affected by it.

This is such a beautiful and succinct way of saying what is one of the basic truths we learn through meditation and mindfulness.  Very well said and a most welcome thought for the week.

I am grateful to get such messages. They are immensely useful thoughts to overcome such long persisting mental habits. In my 5 years of interactions with CF team and sites, I feel so empowered and  mentally grown up as i have not seen for any common person (excluding CFers and exceptions).

This article reminds me of what Somik had shared with me:  "Pain is not under your control, suffering is. Pain is a condition, but suffering is a decision. The starting point of dealing with pain is to accept it."   Pain can be both mental or physical.