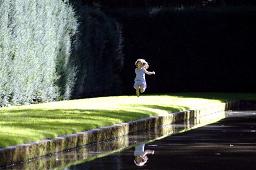 Many people have told me that they find something and then lose it. They wait and they seek, and then find and lose it again. Most of the time, seekers are trying to rediscover or re-attain something that they tasted but lost touch with. The reason that we lose touch with that which is most important, precious and sacred, is not that it's far from us or distant, it's because it's not the most important thing for us. Often people take things for granted that are very near to them. Wives take their husbands for granted, husbands take their wives for granted, parents take their children for granted, children take their parents for granted. That which is most dear and so close to us is easy to forget the significance of.

This is about a willingness to re-educate ourselves. If we recognize ourselves to be unfree or not as free as we know is possible, it is because of choices that we make all the time, without being aware of it. If that's the case, we have to make the effort to find out which choices take us away from where we think we want to be. We have to remember that the goal is never moving from where we always have been, never straying from there, and never losing touch with what's most important -- always allowing that to come first before anything else. When we get to that point, our work is over: there is nothing left to do. Then we will become truly independent individuals.

Worship God in the Spirit of Truth and Life. Then and only then one enjoy's joy and freedom.

I have always had a conviction about life and existence in its totality that life in itself is all about choices. The choices you make for yourself about life determines your freedom or slavery either conciously or unconciously.

Our everyday decision influences our life style and make obvious our our being independent or not. I believe every man will be truely independent only when we see life through God's eyes.

Thanks for the article