When Science Is The Arbiter Of Metaphysics 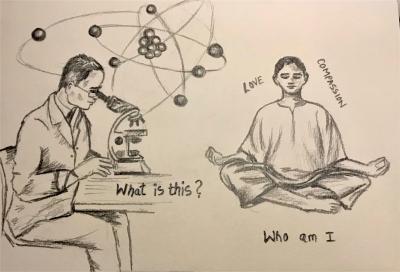 Although I had been raised in a devout Christian family, where prayer and Scripture readings were a nightly ritual, I, like most scientific types, came to believe in the possibility of a material conception of reality, an ultimately scientific worldview that would grant a complete metaphysics, minus outmoded concepts like souls, God, and bearded white men in robes. I spent a good chunk of my twenties trying to build a frame for such an endeavor. The problem, however, eventually became evident: to make science the arbiter of metaphysics is to banish not only God from the world but also love, hate, meaning—to consider a world that is self-evidently not the world we live in. That’s not to say that if you believe in meaning, you must also believe in God. It is to say, though, that if you believe that science provides no basis for God, then you are almost obligated to conclude that science provides no basis for meaning and, therefore, life itself doesn’t have any. In other words, existential claims have no weight; all knowledge is scientific knowledge.

Yet the paradox is that scientific methodology is the product of human hands and thus cannot reach some permanent truth. We build scientific theories to organize and manipulate the world, to reduce phenomena into manageable units. Science is based on reproducibility and manufactured objectivity. As strong as that makes its ability to generate claims about matter and energy, it also makes scientific knowledge inapplicable to the existential, visceral nature of human life, which is unique and subjective and unpredictable. Science may provide the most useful way to organize empirical, reproducible data, but its power to do so is predicated on its inability to grasp the most central aspects of human life: hope, fear, love, hate, beauty, envy, honor, weakness, striving, suffering, virtue.

Between these core passions and scientific theory, there will always be a gap. No system of thought can contain the fullness of human experience. The realm of metaphysics remains the province of revelation. [...]

In the end, it cannot be doubted that each of us can see only a part of the picture. The doctor sees one, the patient another, the engineer a third, the economist a fourth, the pearl diver a fifth, the alcoholic a sixth, the cable guy a seventh, the sheep farmer an eighth, the Indian beggar a ninth, the pastor a tenth. Human knowledge is never contained in one person. It grows from the relationships we create between each other and the world, and still it is never complete. And Truth comes somewhere above all of them, where, as at the end of that Sunday’s reading:

The sower and reaper can rejoice together. For here the saying is verified that “One sows and another reaps.” I sent you to reap what you have not worked for; others have done the work, and you are sharing the fruits of their work.

Paul Kalanithi wrote essays for The New York Times and Stanford Medicine reflecting on being a physician and a patient, the human experience of facing death, and the joy he found despite terminal illness. He passed away at the age of 37, in 2015. Excerpt above from his best-selling book, When Breath Becomes Air.

SEED QUESTIONS FOR REFLECTION: How do you relate to the notion that no system of thought can contain the fullness of human experience? Can you share a personal story of a time you realized that you are reaping what another had sowed? What helps you remember that human knowledge can never be contained in one person?

In graduate school while getting my masters in Social Work, I learned from many different professors and benefited from their wisdom and knowledge. I loved it when the professors presented their own ideas which were unique to them. This showed me that there are many different ways of approaching a patient and his/her issues. Psychotherapy is not black or white. It is helpful to be creative and go with the flow and to join the person the very best that you can.

As a scientist and man of faith as well, this resonates with my own heart. It is truth that both of my sons, cosmologist and ecologist respectively, embrace as well.

Agreed that no one human thought system embodies the human experience. I think of a TED talk about being a good conversationalist and the speaker saying "everyone is an expert in something," and that's true because everyone has their own experience that no other human can have. I reap what others have sowed pretty much daily. My struggles that I have today exist because my parents gave me all the things they struggled so hard to get to - stability of home, support to get through difficult times, etc. Without their hard work getting me here, I'd be where they were with my struggles.

I agree that no system of thought can contain the fullness of human experience. Thought is one aspect of the human experience. The bandwidth of human experience is much greater than the width of thought or any system of thought. I've believed for a long time that we stand on the shoulders of the couple billion years of life that came before us. Furthermore, all life is one, thoroughly interrelated and interdependent, so one person's gain or loss is everyone's gain or loss and we reap what others sew. I believe human knowledge is contained in the fundamental or cosmic ground of which each human is an expression, and I believe human knowledge can not be contained in one person's human self. I think the capacity of one human is not great enough to contain all human knowledge.

this reflection brings home the simple fact that there are different perspectives on an issue. No single system or thought can do justice to the whole picture. I am indeed reaping the fruit of hard labour put in by my parents. They handed me a running hospital of 35 beds. They prepared the ground for me to leap higher. Today we are an institute with 320 beds and serving 10,000 women /year. We were standing on the shoulders of people who worked hard to give us what we needed to become who we are today.

We are a multidimentional human being. Science helps understand the body-mind complex, the physical, mental and emotional dimensions of us as human beings. Its approach is objective. There is something beyond the ojective frame of reference. It is personal and subjective. It is the inner world of unconditional love or divine love. It is personal world yet it is transpersonal and universal. I keep my mind open and free to understand and apprecaite the world of Science and the worrld of Spirituality. This way of living has helped me to apprecate both types of world.
Namaste.
Jagdish P Dave

What helps me know that human knowledge can never be contained in one person (outside Jesus Christ Himself) â€¦ is the truth â€¦ we are not BIG enough. We have no idea. We are but dust compared to Him. ðŸŒ±

Another lovely choice. The knowledge of Science and the wisdom of Spirituality behooves us to appreciate everyone's perspective. Context always adds its own dimension. When the whole play of the world is in the heart-mind region and not just mind or just the heart region, when in doubt almost always, the heart never lets you down, Now, that might not be the most popular or obvious outcome one expects, but when in doubt - trust your heart - the very seat of wisdom. Is it not quite ingtersting that centuries ago, Science and scientists were trying to get endorsement from the Churches for their findings and in the current era, religious and spiritual spirants are asking for scientific evidence - prove meditation can help calm your mind, avert stress, feel the presence of THE FORCE within etc., When the world accepts their complementary role, we will have a wiser world - pure, simple and in tune with nature.

"Human knowledge is never contained in one person." How beautiful and true is that? We've forgotten that everyone has their own world view and that there is no right or wrong in that.

Quantum Physics is bridging the gap but old paradigms are difficult to release.

Anything that brings peace to someone (prayer, music, holding hands, etc.) is very worth while and helpful. We may want to ask the patient what would bring him comfort. I think we gradually separate from our loved ones as we are transitioning into death. Separation is sad but necessary. I watched my mom and sister begin to turn from us as they got closer to death. I hope I can let my children know how much they are still loved as I am dying.