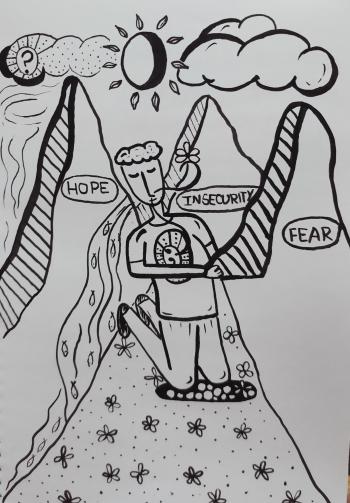 Hope is what propels us into action. We’ve been taught to dream of a better world as the necessary first step in creating one. We create a clear vision for the future we want, then we set a strategy, make a plan, and get to work. We focus strategically on doing only those things that have a high probability of success. As long as we “keep hope alive” and work hard, our endeavors will create the world we want. How could we do our work if we had no hope that we’d succeed?

Motivated by hope, but then confronted by failure, we become depressed and demoralized. Life becomes meaningless; we despair of changing things for the better. At such a time, we learn the price of hope. Rather than inspiring and motivating us, hope has become a burden made heavy by its companion, fear of failing.

So we have to abandon hope, all of us, and learn how to find the place “beyond hope and fear.” Liberated from hope and fear, we are free to discover clarity and energy, but the journey there demands behaviors we’re not familiar with or have actively avoided. Here are a few markers of this journey, blessed wisdom gleaned from the experiences of those who have persevered and maintained steadfast focus even when their efforts have yielded little or no results.

Rudolf Bahro, a prominent German activist and iconoclast, describes the first step: “When the forms of an old culture are dying, the new culture is created by a few people who are not afraid to be insecure.” Bahro offers insecurity as a positive trait, especially necessary in times of disintegration. Yet is it conceivable to think that feeling insecure would increase our ability to stay in the work of creating something new?

I don’t know what Bahro meant by “insecure”; however, I’ve noted that those who endure, who have stamina for the long haul and become wiser in their actions over time, are those who are not attached to outcomes. They don’t seek security in plans or accomplishments. They exchange certainty for curiosity, fear for generosity. They plunge into the problem, treat their attempts as experiments, and learn as they go. This kind of insecurity is energizing; people become engaged in figuring out what works instead of needing to be right or worrying about how to avoid failure. Whenever they discover something that does work, there’s a huge rush of energy, often accompanied by laughter.

A willingness to feel insecure, then, is the first step on the journey beyond hope and fear. It leads to the far more challenging state: groundlessness. A knowing that nothing ever remains the same, learning to live with the unrelenting constant of change, realizing that even the good things won’t last forever, accepting that change is just the way it is.

Excerpted from this article.

SEED QUESTIONS FOR REFLECTION: What does groundlessness mean to you? Can you share a personal story of a time you exchanged 'certainty for curiosity, fear for generosity'? What helps you accept the unrelenting constant of change?

My desire is to surrender to what is, to "let Thy will be my will". It requires being in the present moment and keeping my heart open.

â€œYour work will bear fruit in 700 years or so.â€ (From the longer article, quoting advice the Dalai Lama gave to Westerners.) Wow. Thatâ€™s a new time scale for me - Iâ€™m only 1/10th that old.

Most of our anxieties are routed from insecurity and ultimately out of fear. The moment you start manipulating outcomes you start messing with the balance in life. And there goes the HOPE in thin air. If one starts addressing the fear and let things happen without worrying of the outcomes and just concentrating on actions that one has control over, you will notice all falls in place as it should be. This is the principle that i try to follow and it brings hope and content for me.

I have often reflected on Chogyan Trungpa's quote on groundlessness: "The bad news is you are falling through the air with no parachute. The good news: there is no ground." I may have paraphrased. I continue to care for my husband who has been in decline the last five years and is now on hospice. Here, there is no hope; only love (along with exhaustion and grief). I have no idea how much he will suffer or how his death will occur. I don't know if I'd call this curiosity but I am attentive. The generosity also resides in that attentiveness.

In my youth I felt groundless more often than grounded. I strived for certainty and it turned me into an anxious and unhappy person. Then death came for a beloved one and there was no thing I could do. That was the gift of my opening to a different way of being. Embracing (sometimes just allowing) uncertainty and breathing a lot and seeing beyond certainty and uncertainty to the many names for god. Light, generosity, beauty, truth, life, joyâ€¦the list goes on!!! With deep love to all beings, May you be well.

As with most pieces like this, the"how to" of going beyond hope and fear is not dealt with, and humans are hardwired to those two emotions, as well as resistance to change! Getting comfortable with groundlessness and unpredictability takes much internal work, through presumably meditation and the courage to embrace, rather than push away, the uncertainty or "undesirable" condition. Much hard work, and much time; it will not happen overnight. It's complete overhaul of one's though processes.

I am not sure what Germen word was translated as "insecure", but I think he might have meant "vulnerable".

Like the Fool in the tarot deck, walking toward the brink of a precipice leaving the safety of the ground behind.

To me groundlessness connotes something frightening. To be grounded even in groundlessness is what I aim towards. Groundlessness is a feeling of anxiety. What helps me confront such an existence and experience is accepting it and finding a space of steadfastness during the experience by way of deep breath, by allowing attention to be over some object for a time, by watching the world as if for the first time. I am more of a visual person. Seeing the benign nature of objects. The world is truly beautiful even in its changing and spiralling-out of control-nature. This Beauty found in practice of Suchness helps me to find roots even in chaos. It is denoted best in a Zen Story known as Tigers and the Strawberries.

Groundlessness means lack of ground or foundation, lack of anything to count on. As I see life, the ground we have is constant change. We can count on that. No change is an illusion. Actually, I exchanged certainty for curiosity a long time ago. There is no certainty. We live in the unknown. For me those are simply facts of life. As for exchanging fear for generosity, I'm working on it -- my fears have greatly dwindled, and I practice being more generous. What helps me accept the unrelenting constant of change is not seeing it as unrelenting which for me has a negative and oppressive connotation, and seeing change as 'that's life'. It helps that I've become pretty good at being in the present (we are alive only in the present), trusting what I believe to be right action in the present, and letting go of outcome.

In my relatively long life journey ( I am 96 years old) I have encountered many ups and downs and there were a few times I felt groundlessness, a sense of sinking down without bottom, darkness without rays of hope. In such dark times of my life I felt and saw the light of based on the ground of unvaering faith. Faith is the light that hardly gets extingwished.
I felt dense darkness and groundlessness during the second stage of my lie. I felt helplessness and hopelessness. They were dark periods of my life. Light of Faith in the higher power helped me go through dense darkness and see the light. Keeping my mind open and curious, accepting myself as imperfect, mindfully reducing the noise in my mind, and being grateful to my family and friends for holding my hands when I was falli
ng down have been very helful to me.
Namaste!
Jagdish P Dave

Wise and well-said. In the throes of mid-life, as I acknowledge that Iâ€™ve likely lived more than half my life, maybe much more, Iâ€™m awakening to the truth that peace and meaning now, as well as in coming to terms with death, depends on â€œaccepting that change is just the way it is.â€ No easy task, but your clear and kind article helps a great deal in that process

When I hit this wall and experience the groundlessness, that is when I go to courage. I must dig deep and honor my willingness to experience failure and move forward anyway.

We should be curious about what the day will bring. It's all impermanent.