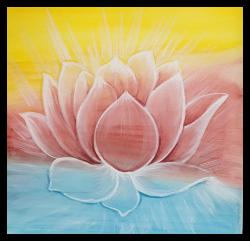 The type of security and protection that we expect in this world of human beings is based on the humanly conceived notion of what is good and necessary for the welfare of all people. But God [Dharma] cannot be equated with human notions of any kind, and the human notion of welfare and good need not necessarily be the same as the divine vision of what is good and what is true well-being. Therefore, the insight of the ancient masters visualised the great power of divine protection as a threefold activity, designated in Hindu religious parlance as Durga, Lakshmi and Saraswati.

The creation of the world is a threefold process taking place at the same time. Something originates, something is maintained in a particular position, and it gets transmuted into a condition which is the purpose of this very process. The universe is not a static, stale existence. It is a movement towards God. The universe is the path which living beings tread in the direction of the achievement of their union with the Maker of all things. The universe is a movement; it is a process, which, naturally, is not stasis, and it is not merely dynamis. It is not mere activity or motion; it is not mere position in a particular spot of space. It is a balancing of these two processes: stasis and dynamis. In scientific parlance there is no concept of this balancing of stasis and dynamis -- Tamas and Rajas.

We maintain a position as an identical individual in our own personalities, notwithstanding the fact that we are continuous rivers that flow. We maintain ourselves in an apparent position, while we are a moving process. We have grown from the embryo to this adult condition of our mature bodily existence by a process of utter transformation and a perpetual rejuvenation, a coming and going of living cells in the body. The origination, the maintenance and the destruction of many living organisms have gone to constitute this bodily personality of ours.

Thus, there is both activity and fixity, but there is also an awareness of this process. It is not merely mechanical action that is taking place in the universe. We are sometimes told, in the language of classical science, that the world is like a huge machine, and it works systematically, like a computer or a kind of arrangement of parts, which are modeled or patterned in such a way that the pattern of the arrangement of the machine's parts can decide the nature of its activity and also the output of its operation.

But though, in its visible form, the world appears to work like a machine, and there is a connection of the past with the future through the present, there is a transcendent element in the world. It is non-mechanistic, finally. From the point of view of biological studies, our body may be determined by the laws of biology; thus, we may say our body is a machine and it is mechanistic. Also, from the point of view of one type of psychological study, our mental activity also can be considered to be mechanistic in its operation. Nevertheless, we are none of us a machine. There is an element in us which surpasses the mechanical activity of the body as well as of the mind.

Fixity and action ("tamas" and "rajas"), are balanced by sattva, which is not actually one of the properties. It is a transcendent property. It balances the action and the operation of both tamas and rajas. Hence, it is inclusive of whatever is worthwhile and meaningful in the activities of both.

Excerpted from this article around the Indian festival of Navratri.

SEED QUESTIONS FOR REFLECTION: How do you relate to the notion of sattva? Can you share a personal story of a time you experienced the balancing of stasis and dynamis? What helps you make space for balance?