Everything Human Is Natural 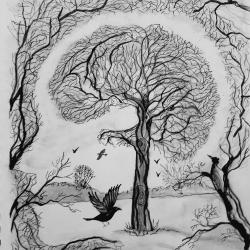 Man is as much attached to nature as a tree, and though he walks freely on two legs and is not rooted in the soil, he is by no means a self-sufficient, self-moving, and self-directing entity. For his life he depends absolutely on the same factors as the tree, the worm, and the fly, on the universal powers of nature, life, God, or whatever it may be. From some mysterious source life flows through him unceasingly; it does not just go in at birth and come out at death—he is the channel for an ever moving stream, a stream that carries the blood through his veins, that moves his lungs and brings him air to breathe, that raises his food from the earth and bears the light of the sun to his face. If we look into a single cell of his body we find the universe, for sun, moon, and stars are ceaselessly maintaining it; we find it again if we plumb into the depths of his mind, for there are all the archaic urges of primeval life, both human and animal, and could we look deeper we might find kinship with the plants and rocks. [...]

The isolation of the human soul from nature is, generally speaking, a phenomenon of civilization. This isolation is more apparent than real, because the more nature is held back by brick, concrete, and machines, the more it reasserts itself in the human mind, usually as an unwanted, violent, and troublesome visitor. But actually the creations of man, his art, his literature, his buildings, differ only in quality, not in kind, from such creations of nature as birds’ nests and honeycombs. Man’s creations are infinitely more numerous and ingenious, but this very ingenuity, together with his fear, aggravates his feeling of isolation, persuading him that he is a creator in his own right, separate from nature. For once again it would go against his self-esteem to have to admit that his superb faculty of reason and all its works do not make him the master of nature rather than its servant. Bewitched by his power of reason and urged on through fright of his fear, man seeks his freedom in isolation from and not in union with nature—“whose service is perfect freedom.” [...]

Man’s struggle for mastery is magnificent and tragic; but it does not work. And the difficulty is not so much in what he does as in what he thinks. If he were to seek union instead of isolation this would not involve what is generally called “getting back to nature”; he would not have to give up his machines and cities and retire to the forests and live in wigwams. He would only have to change his attitude, for the penalties he pays for his isolation are only indirectly on the physical plane. They originate from and are most severe in his mind.

From "The Meaning of Happiness: The Quest for Freedom of the Spirit in Modern Psychology and the Wisdom of the East."

SEED QUESTIONS FOR REFLECTION: What do you make of the notion that nature's service is perfect freedom? Can you share a personal story of a time you sought union with nature instead of isolation? What helps you resist the trap of isolation and go toward union with nature?

Freedom is the option of choosing. Perfect freedom is to make a choice aligned with nature. We are free to both destroy and to build. Choose wisely.


My thoughts is perhaps this is NOT a useful conversation and perhaps just a distraction of sorts a bit like the chicken or egg. Each can be a valid story duality and nonduality AND even this journey so many mystics take for transcendent experiences where one class is the dissolving of the "I" into the "One" while perhaps fascinating and inspirational is just a side show. The more challenging and fruitful one is to have the deep connections with FLOW of what is, NOT the QUESTION of IS Oneness TRUE. (And can I taste it via meditation, yoga, psychedelics, etc..)

I see the FLOW state is the deepest alignment with the systems, people, nature, thoughts and love that can be in your field of being. It is as much about tangible actions as inner states that serve the greater good which is both a subjective everechaning mystery and not that at the same time.

Does this make any sense? What do you think?
[Hide Full Comment]

It would read much better if the pronouns were not so patriarchal.

I very much like this essay by Alan Watts. He was a wise man. By living in harmony with nature, we are in service to it and it serves us. We are in no way it's master. Imagine being in a stream -- there is perfect freedom in going with the flow. We are in the world and cosmic stream of nature, and there is perfect freedom in going with the flow, accepting that we are a part of it, not apart from it. We are composed of the same stuff of which it is composed, and affected by all the same forces that affect it. To attempt to isolate from it or fight it or try to control or exploit it is foolish. The fact is I am in union with nature, and to go against it or try to isolate from it is to be anti-nature, and the result of that for me as an individual or for us as a society is unhappiness, sickness, and death. I've grown over time in my sense of union with nature, and it has resulted in my being more compassionate and at peace.