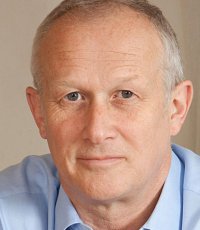 “There is hope and change is entirely possible. But the systems and rules we will need to live by to ensure that all stakeholders (human and otherwise), live long and prosper now and into the future cannot be the same ones we abide by today.”

As far back as he can remember, Neil Gaught has been consumed by “a conflict that exists in my heart and mind that pits the way things are against the way things could be”. Having grappled with that conflict much of his life, Neil is now a leader among a growing number of business thinkers who are helping companies create a whole new operating system to radically rethink and operationalize purpose in order that they (and we) might have a sustainable future.

Neil discovered design in his early twenties as a solution and a discipline for seeking to reconcile the world as it is from the world as it could be. After graduating with a degree in graphic design, he found his own design consultancy and achieved success with his business for the next decade. Yet to Neil, graphic design “felt somehow too superficial and its impact too fleeting.” He sold his design business and joined the world’s biggest and, financially, most successful branding consultancy of the time.

The life was fast-paced, demanding, sometimes glamorous, very well paid and ultimately "important" – at least it seemed so at the time. Neil worked around the world for a few years for big-name corporate clients in the banking, energy, pharmaceutical, infrastructure, mining and technology sectors. And then it all, quite suddenly, collapsed. The dot-com stock market bubble burst, several of Neil’s clients such as Arthur Andersen, BP and Merrill Lynch were found to be complicit in worsening the world we live in, and, at the exact same time, his belief in anything that he was doing was right was shaken to the core.

Neil dropped out of the corporate system completely and moved to New Zealand, where he found the time to look with fresh eyes from a distance and consider the way things were and the way they could be. He carried on working in the private sector, but gradually his work for human rights organizations, international NGOs, various parts of the UN, billionaires’ foundations, and sustainability agencies shifted his view and opened up new questions.

During this time of renewal, Neil found the three words “Single Organizing Idea” in a bestselling business book called Good to Great written by Jim Collins in 2001. He developed the words into an approach and actionable tools. Neil believes that while Single Organizing Idea (SOI®) can’t directly change the capitalist system we have created (that is in the gift of states and governments), it can change the operating systems of the enterprises that feed it. SOI ties both the economic and social strategies into one single strategy, the outcome of which is not only commercially sustainable, but also meaningful for those wishing to find fulfillment in what the business does. SOI is about total commitment and being organized around a single plan of action the progress of which is measured. It’s not about ticking a box or having a “doing well by doing good” style purpose statement. SOI is the means to get on and do it.

On his return to the UK, Neil dedicated his focus to the international development sector and "those in the private sector that wish to make a contribution to society beyond corporate social responsibility and philanthropy." Today his global client list includes the Bill & Melinda Gates Foundation, CARE, CRS, Global Communities, The World Bank, several UN and human rights organizations "and, of course, businesses that have put economic and social purpose at their core."

Neil’s book CORE: How a Single Organizing Idea Can Change Business For Good (2017) was born from three decades of inquiry, as an answer to how Neil himself, as well as businesses, can be a force for good. A finalist for the 2018 Business Book Award, it crystallizes his approach to taking on “business as usual”, drawing on stories, case studies and his own experiences working in the field across five continents. His follow-up book, The CORE Playbook, published in 2020, was born out of a concern that things are not happening quickly enough, and describes exactly the tools and processes any organization can employ and the steps necessary to make change for the good possible.

The route to goodness is best told as a story with many characters, and Neil is a craftsman at finding common ground. In launching his book, instead of the usual presentation, Neil organizes Dinner Debates across the globe where he pits experts in different sectors against one another to dig out what it takes to accelerate change towards the UN Sustainable Development Goals. In groups as large as a thousand people, Neil harvests and ranks diverse suggestions using crowdsourcing platforms to create a bridge between visionaries and practitioners, idealists and realists.

The son of a headmaster, Neil was born in Hertfordshire, UK, in 1963 but grew up on the Lancashire side of the Pennines. He had youthful stints in the British Army and the French Foreign Legion. Neil’s first book was dedicated to his best friend in the British Army, Fred Slough, who was killed in the Falklands/Malvinas conflict just a few hours before peace was declared in 1982.

Changing the game. The systems we have created to serve the few at the expense of the many is destroying us and everything around us -- the evidence is there for all to see. What makes me come alive is taking on the defenders of this status quo, the individuals, the institutions and the systems designed to delay, deny or disrupt our progress to a better world for all. There is an alternative way forward and my small contribution to helping accelerate that way forward is what gives me my purpose in life. Activism is not my way -- that is for others (and important) -- working out, working on and working with others to find a better way forward is the thing that consumes me.

Falling in love. I've had an remarkably full life, and there have been some pretty big turning points. You don't start out as a soldier, become a designer, tackle being an entrepreneur and somehow end up being a writer and a change agent without being open to adventure and being prepared to pivot often and well. But without doubt the pivotal turning point of my life was falling in love with my wife Jo. The power of that experience transformed me and everything about my life in an instant, and it is still transforming me to this day.

This is a question to make you stop and think! You may not immediately associate the word kindness with being a soldier, but looking back it was the daily acts of kindness and self-sacrifice that got us through the extraordinary challenges we faced.

To see my three sons playing with my yet to be born grandchildren, with the sun on their faces and joy in their hearts. That is top of my wish list.

We can do better than this, we must and of course we will. (I'm an optimist)