Can architecture be life-changing? Architect Danish Kurani has demonstrated to the world that, yes, absolutely, it can. In fact, he has identified the proverbial elephant in the classroom.

While the past several decades have seen enormous advances in pedagogical methods, the shape of our learning spaces has remained largely unchanged since the 1950’s. Think: rooms filled with desks in rows all facing front, in an environment directly counter to contemporary progressive learning styles. These outdated school structures often stifle innovation and creativity.

Seeking to remedy these constrictions, Kurani links architecture with student-centered learning. His innovative designs help schools empower students and teachers in the learning process, thus helping entire communities prosper. For example, the Literacy Lounge project is underway in Brooklyn to give underserved kids access to “America’s first smart library with sensor technology,” while another project will build an arts center in St. Paul, Minnesota, enabling artistic expression in Black youth in a culturally-relevant environment.

Always curious about and devoted to the question of how a space’s design might help solve issues such as poverty, hunger and inequity, in 2011 Kurani left the world of large design firms in which he had worked since graduating from Rice University with a Bachelor’s degree in Architecture. Reflecting on the world’s monumental social problems, he knew that, at the core, the solution lies in education.

Kurani took his thoughts to Harvard where he earned his Master’s of Architecture in Urban Design. He subsequently founded Kurani, “a platform for funding life-changing architecture,” using the “School Box” concept. It utilizes the fabrication of “simple, interconnected parts,” to provide “maximum flexibility” which significantly reduces construction cost and time. Perhaps more importantly, the model “has the potential to be more accepting of the latest and best learning models and technologies.”

Kurani recalls playing and building with boxes as a child in the back of the dry-cleaning store his parents owned. By age 13, he was designing recreation centers for kids on the streets of Karachi. Upon hearing his mother’s recollections of her school days, he remembers being struck by the vast differences between his own education and hers, which had been “all about facts and memorizing.” Reflecting on these differences alerted Kurani to how much education has changed over the last few decades.

In his 2016 TEDx Talk, Kurani asks why, if we’ve had such rapid-fire changes in technology, medicine and other fields since the 1950’s, then why not in school design? “Education,” he says, “is evolving, it’s changing, and while there have been dramatic changes, our school buildings haven’t changed.” These buildings were built for one-directional education, and they were built to last. Though practical, it is these very spaces that keep teachers and students from engaging in 21st century enlightened learning methods such as peer collaboration, real-world problem-solving and student-generated curricula.

Kurani says it well: “We are building a state-of-the-art Formula One engine in the body of an old, broken-down Buick, and wondering why the car won’t go.”

But how does Kurani achieve what schools have so long been unable to? He explains that, rather than function leading to form, as in traditional architecture, that learning must lead to form. The difference is to go beyond Maslow’s hierarchy wherein we ensure the basics of safety and shelter to include the very best innovative pedagogies that consider students’ needs and desires for their own learning. Moreover, Kurani goes further than learning leading the architectural design, to considering the actual purpose of learning. Do we, as a global society, wish to merely create efficient workers, or do we wish to develop each person’s imagination and creativity so that communities might solve their own social problems and direct their own futures?

In 2015, Kurani was invited by Denver Public School’s Imaginarium Lab to help Columbine re-design its school. The teachers’ vision was to personalize education and helps students learn in whatever ways were comfortable to them. In order to figure out the best environment to support different forms of expression, they sketched floor plans and arrangements according to purpose, and they talked to students about what would make them comfortable, and what inspires them. Together, they came up with 15 unique tools and learning games, trained the teachers how to use them, as well as how to get the most out of their spaces. The results were that students became more confident, took more risks, worked together in teams, and the shy and quiet ones began speaking up.

In 2018, Kurani created the Manhattan headquarters for Black Girls Code, a nonprofit dedicated to teaching computer science to women of color, ages 7 to 17. Its success is due in part to the acknowledgement of an inherent gap in opportunity for young girls of color.

Focusing on gender and racial equality, mental health, community sustainability and education, to date Kurani has built 14 projects with several others currently in development. His most recent 2020 project is Riverbend, a new boarding school Near Chennai, India, where the design of the entire campus is like a village. The concept is based on studies about what makes a village special, and what makes people the happiest. The answer is relationships, thus the design leads students of all ages to cross paths.

At the end of grad school, deciding to not go back to the corporate world and stepping off the beaten path to find my own way

Receiving letters of sincere support from people around the world

Experience living in a place where people put the community first, constantly help one another, and live without a capitalistic/scarcity mindset (certain areas in Scandinavia and Japan) 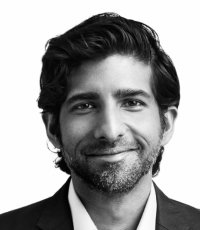