“Ignorance just means you don’t know that there is a way out of your suffering.”

At once a lawyer, life coach, yoga teacher, and mother, Denise Bonnaig has been force of transformation in the lives of many. As a founding member of the boutique law firm Bonnaig & Associates, Bonnaig has been working to give voice to the voiceless in the contexts of civil rights, immigration, and workplace litigation for over thirty years. When not practicing law, she is busy as owner and teacher at Princeton Power Yoga and as a coach at Authentique Coaching, of which she is also the founder. And while the threads of Bonnaig’s work may be numerous, something very powerful holds them all together: a commitment to personal transformation.

Be it in law or in life, transformation, for Bonnaig, has meant bringing to light what holds us back. Bonnaig’s work, as she describes it, is to help others “transcend limitations, transform wounds into love, power, forgiveness, and gratitude.” Doing so means knowing how to see.

As a young girl, Bonnaig’s own journey of transformation began when death asked her to ask the question “who am I?” At the age of five, Bonnaig lost her mother, whose absence elicited a constant inner sounding of identity. Often feeling like she wasn’t fully understood, Bonnaig became attached to a need to always be right. “I decided not to allow anyone to ‘make me wrong,’” recalls Bonnaig, “but rather make sure that I was ‘always right’ and in the process, ‘make everyone else wrong.’” This “wanting to be right all the time,” as Bonnaig puts it, was, she later recognized, also an underlying motivation for the decision to study law at New York University. Yet as an unresolved inner question, this imbalance was a continuous source of suffering, both personally and in the context of her marriage, where she found that her propensity for wanting to be right often led her (unhealthily) to seek the last word.

Then Bonnaig found yoga, taking up her studies under Baron Baptiste. Baptiste’s method allowed Bonnaig to begin to make sense of the now definitive, deeply ingrained question of self, offering a pathway to explore the practice of gaining mental clarity and letting go of inhibiting beliefs and habits. Self-inquiry ceased being a restlessly revolving door and became a labor of love and a path to freedom. Bonnaig delved into the study of yoga and meditation, earning her 500-hour certification as a teacher of yoga and learning various techniques aiming to guide individuals to happiness as a way of being.

Among these practices, Vipassana meditation, or meditation anchored in seeing things as they are, grew to occupy an especially powerful role in Bonnaig’s life, teachings, and practice. Vipassana was a way for Bonnaig not only to encounter her own struggles and tendencies, but also to come to illuminating, instrumental insights. “There is something in particular I keep noticing,” remarks Bonnaig: “there is a tendency to be ignorant, which all of us have in common, no matter how bright and talented we are (…) ‘ignorant,’ meaning not knowing that there is a way out of [our] suffering.” In committing herself to sit silently with herself for more than a week during yearly Vipassana retreats, Bonnaig eventually came to recognize a simple process for helping to eradicate suffering:

“The process is simple. It certainly is not easy. All it takes is commitment. You all know commitment—you have acquired advanced degrees, raised children, started foundations, and run marathons. You’re totally capable of doing what’s simple, even if it’s not easy. The first step is acknowledging that you’re suffering and don’t know your way out of it. The second step is deciding that you want to find your way out of it. The third step is determining that you will use your mind and your matter (your physical body) to go beyond mind and matter.”

For Bonnaig, being able to help others out of their suffering is a commitment and a passion as well. “If I can give you the gift of knowing how to eradicate ignorance, I would feel like a large part of my life’s mission is accomplished,” says Bonnaig.

And so it is that Bonnaig’s sense of fulfillment, joy, and peace in her work as a trial lawyer, yogini and yoga teacher, and spiritual guide (not to mention in her “life experience as someone who has experienced illness, death and has raised three successful black men – two of whom are medical doctors, against all odds”) have been inseparable from her own journey toward self-understanding. And while Bonnaig has known the beauty of experiencing no tethers to definitions of the self, the wisdom of her story and her teachings lie in the fact that they bespeak the easy, natural possibility of being able to be fully present to the spiritual dimension of life while still occupying one’s worldly role and persona. This dynamic balancing act is both the space in which transformation can occur and the means by which it does—once we begin to truly see.

More about Bonnaig’s spiritual journey and journey to coaching can be found on the Authentique Coaching website, where she also keeps a blog.

What makes me come alive is discovering that moment of awakening in a client or a student which often leads them to transformative action. It is also those moments in silence, at the Vipassana retreat for example, when I gain insight from sitting quietly and realizing that stillness is the key that unlocks the door to insight.

My father who began as an errand boy in a French owned company in my country and became the CEO of that company. He began working for the company during the colonial period, basically as a second class citizen in his own country. He had no connections, but had more smarts, drive and guts than anyone I have ever met. During summers, when I was in high school, I worked with my dad. One day a woman who exuded a great deal of confidence, both in her bearing and manner of expression, walked into the office. I asked my dad who she was, "the company lawyer" he responded. It was the first time I saw a women lawyer. But I was mostly impressed with the way she spoke to the men around her, the way she commanded the room. She embodied what was possible for a woman. This was a pivotal moment that inspired me to become a lawyer. So when I arrived in the States, speaking no English, after having studied Law in France, that grain of the possible was already sown in my consciousness and, I knew that in spite of the challenges, I would realize my dream of becoming a lawyer in America.

My friend and yoga teacher Davids role in my discovering my breast cancer at its very early stage 11 years ago.

I'd like to be part of any initiative introducing yoga and meditation in high schools. I think humanity would benefit so much if teenagers received the gift of owning their mind-body connection, before going out into the world as young adults.

Life is full of possibilities when we realize that we hold the key. The way out of our suffering is MEDITATION. Moving from Headspace to Heartspace and Midwifing the New 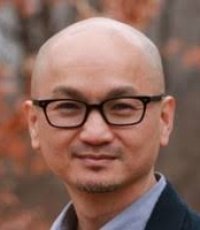