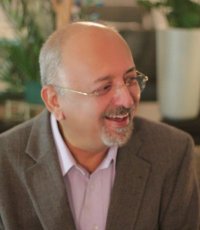 Anil Sachdev is a businessman who integrates a path of self-knowing and meditation with a successful executive career. His business experience in India and across the world covers areas such as talent management, strategic change and organizational transformation. He has been a senior leader in the Eicher Group in India and the founder and CEO of Eicher Consultancy Services. He founded Grow Talent – the leading player in Education and HR Consulting – and became the Founder and CEO of the School for Inspired Leadership (SOIL) outside of Delhi, India, an innovative values-based business school with the vision of building inspired leaders with character, competence and enthusiasm.

SOIL puts focus on the five pillars of Mindfulness, Ethics, Compassion, Diversity and Sustainability to develop character; it emphasizes whole systems thinking to enable competence; and it encourages all its students to find their “callings,” discover their gifts, and learn to leverage their positives toward their purposes. SOIL has been co-created by a group of 32 leading global and local corporations. In addition, it partners with 25 not-for-profit organizations in order to encourage the “social innovation” sector to confront some of the most pressing issues faced by our planet today.

Anil’s values, informed by the teachings of Swami Chinmayananda and the Bhagavad Gita, have been core to his professional work. He offers nature-based courses in the Himalayas using the theatre arts to teach positive psychology and appreciative inquiry to SOIL students based on Indian spiritual teachings. In December 2015, he hosted the World Leadership Dialogue in Pune, India, bringing together leaders in education, business, government, journalism and not-for-profits to speak, in a secular way, about the applications of the Bhagavad Gita’s wisdom to today’s leadership.

Anil's commitment to ethical modeling and leadership was tested earlier in his career when, as a human resources head, he had to compassionately let go his company's entire batch of 21 incoming hires from India's top schools (many of whom he had personally recruited and hired) due to their falsification of travel expense reports following a group trip.

After completing his MBA from the University of Pune in 1975, Anil spent 15 years at Tata Motors and then joined the Eicher Group in 1978. In 1991 he became the founder CEO of Eicher Consultancy Services and later brought A.T. Kearney to India. He later founded Grow Talent – the leading player in Education and HR Consulting. Recognized as a thought leader in leadership development and organizational transformation, he has done pioneering work with leading global and local firms. He began his career with Tata Motors in 1975 and joined Eicher in 1978, working in human resources, operations and total quality management.

He serves on the Academic Committee of CEDEP (an Executive Education consortium, founded in association with INSEAD in Fontainebleau, France to design and develop innovative company specific programs for its members); Chairs the National Committee on Human Resources of the Confederation of Indian Industry of India; and is a Trustee of Chinmaya Mission, a global spiritual nongovernmental organization. Anil has been adjunct faculty to leading business schools such as Indian School of Business, Kelly School of Business at Indiana University, General Motors Institute (Flint, Michigan), Antioch University Seattle, and Ohio University (Athens, Ohio).

Join us in conversation with this inspired and inspiring business leader!

To be in a circle in which people share from their heart!To see young people discover who they are and what they care about!To see people take responsibility for the way we live now!!

To hear my sister share a story about how our Prime Minister was moved to tears after hearing our best singer render a moving patriotic song after India lost the war to China in 1962; to be in the Presence of the great Spiritual Master, Swami Chinmayananda and my dialogue with him at a young age!!

The Chinmaya Mission Ashram in Sidhbari in Himalayas feeding thousands of villagers by cooking and serving lovingly- all by selfless volunteers!!

Write my first book to express my gratitude to so many beings who have touched me!!

When you are inspired by Higher Purpose and become the best follower of this cause, you 'rise' in love and leadership happens to you!!

Giving Money, Time and Self