Jerry White is CEO of Global Impact Strategies and Professor of Practice at the University of Virginia. He shares in the 1997 Nobel Prize for Peace awarded to the International Campaign to Ban Landmines.  He worked closely with Diana, Princess of Wales, and then King Hussein and Queen Noor of Jordan, to address the humanitarian crisis caused by tens of millions of mines buried in over 80 countries. He is known for leading high-impact campaigns, three of which led to major international treaties: the Landmine Ban Treaty, the U.N. Convention on the Rights of Persons with Disabilities; and the Cluster Munitions Ban Treaty.

Meditation. Contemplation of wisdom. Service to humanity. This practice informs my work in teaching as a Professor at the University of Virginia and building a decision analytics company to help leaders make faster, wiser decisions.

April 12, 1984: I was camping in Israel and stepped on a landmine and spent six months in hospital in Tel Aviv learning to walk again with an artificial leg.

My wife Kelly agreeing to marry me.

Building reconciliation bridges with Iran and an Israel-Palestinian peace deal.

Be here now and make your difference count. 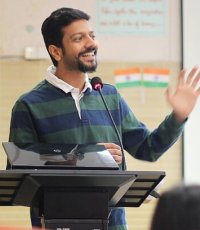