Explorations in the Edge of Self 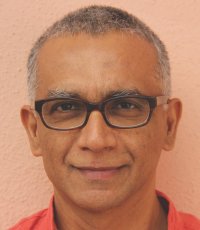 Anil Ananthaswamy is a science writer and author of The Man Who Wasn't There: Tales from the Edge of Self  (Dutton, Penguin Random House, 2015), which has been described as “revealing the awesome power of the human sense of self” via an intimate look at the latest neuroscience of several mental conditions that eat away at patients’ identities – schizophrenia, autism, Alzheimer’s disease, ecstatic epilepsy, Cotard’s syndrome, out-of-body experiences, and other conditions.  Through extensive in-depth interviews venturing into the lives of individuals who lost some part of what we think of as our self, Anil brings alive patients’ stories that offer remarkable, sometimes heart-wrenching insights into what remains.  Using neuropsychology and narrative to take us inside the heads of people experiencing realities very different from our own, Anil, according to one review, “skillfully inspects the bewildering connections among brain, body, mind, self, and society… Readers will be fascinated by Ananthaswamy’s chronicles as he explores, with kindness and keen intelligence, the uncomfortable aberrations that reveal what it is to be human.”

Anil says:  "I think the first thing I realized during the writing of the book is that one should be careful with the use of the phrase 'mental disorders'. Cultures across the world treat disorders of the mind differently from disorders of the body: there is still stigma associated with the phrase 'mental disorder'. ... After interacting with so many people who so kindly shared their life stories with me—I was left feeling that each of us falls somewhere on a spectrum of physical and mental abilities. Each of us is a self that has formed during childhood and early adulthood—and the self is the result of a complex interplay between body, brain, mind, society and culture. There's genetic predisposition, there's upbringing and there's ongoing social interactions."

The Man Who Wasn’t There was nominated for the 2016 PEN/E.O. Wilson Literary Science Writing Award, named an NBC News Notable Science Book of 2015, one of Publishers Weekly's Best Books of 2015, and as a Must Read Brain Book of 2015 by Forbes.

Ananthaswamy’s first book, The Edge of Physics (Houghton Mifflin-Harcourt, 2010), was voted book of the year in 2010 by Physics World.

Anil is former deputy news editor and current consultant for New Scientist. He is a guest editor at UC Santa Cruz’s renowned science-writing program and teaches an annual science journalism workshop at the National Centre for Biological Sciences in Bangalore, India. He is a freelance feature editor for the Proceedings of the National Academy of Science’s “Front Matter” and has written for National Geographic News, Discover, and Matter. He has been a columnist for PBS NOVA’s The Nature of Reality blog. He won the UK Institute of Physics’ Physics Journalism award and the British Association of Science Writers’ award for Best Investigative Journalism.

Ananthaswamy worked as a software engineer in Silicon Valley before training as a journalist at the University of California, Santa Cruz.  He was inspired to become a science writer by his passionate curiosity about the world.  He lives in Bangalore, India, and Berkeley, California.

Join us for a fascinating conversation with this remarkable writer who brings together cutting-edge science and philosophy from West and East!

Being around honest, kind and curious people. And staring at a clear night sky, when the stars seem to hang low.

Fortunately or unfortunately, I don't have a sense of any one pivotal moment in my life. It's been a series of small moments, each maybe not that significant, that has had a cumulative effect on me. Whether it's reading a particular book (Thoreau's Walden comes to mind, as do some brilliant books on science, such as The Universe and Dr. Einstein or The Lives of a Cell by Lewis Thomas), or being in nature (my first view of the Himalayas or a walk in a forest in Germany, for example), or deep and meaningful relationships that unfurled over time, or profound conversations with scientists with whom I routinely interact, given the nature of my work -- all these have had an impact, however small, and I have changed as a result.

I was on the last leg of my journey through Russia (I had gone to visit the Lake Baikal Neutrino Observatory, to do research for a book I was writing). I had spent four days on and around the frozen Lake Baikal during the peak of the Siberian winter, and was on my way to Japan. I had spent the night in Vladivostok and was taking the flight out to Toyama, Japan. I arrived at the airport only to find it empty, with not a soul in sight. I looked at my boarding pass and realized that I had misread the time and I was hours early. The airport hadn't yet opened. I was tired and hungry and pined for a coffee, but realized I didn't have Russian coins for the only vending machine in the lobby. Suddenly, a man came out of the restroom, wrapped only in a bathroom towel. He was the security guard. He had been taking a shower. We exchanged some words in broken English, and I offered a currency note in exchange for some coins.He waved it aside, went to the vending machine, put in some coins and bought me coffee--and refused to take money from me.The best coffee, I think, I ever had.

There's an enduring image I have of a small seaside village or town from some novel I read (it's probably in England or New Zealand). I don't have a bucket list, but I wouldn't mind living a quiet life staring at the ocean.

Let's be as kind as we can be to each other. It's not as simple as it sounds, because being kind often requires negating our own impulse to be center-stage.