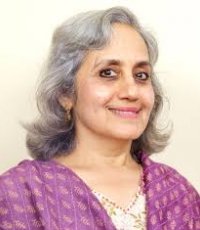 Rajni Bakshi is a Mumbai-based freelance journalist and author who writes about social and political movements in contemporary India.  She stands in the “fertile ground” between journalism and activism – chronicling struggles for more humane and ecologically sound ways of life.  She has written extensively and with great erudition on topics ranging from Gandhian thought to economic, political and social theory, to identity-based social and political groupings. Her books have included Bapu Kuti: Journeys in Rediscovery of Gandhi (1988), which became the inspiration for the Indian blockbuster feature film “Swades”. Her Bazaars, Conversations and Freedom: for a market culture beyond greed and fear (2009) explores a series of probing questions dealing with the history, anthropology and philosophy of the market system to explore the clash of competition and compassion in our social orderings. It arose from Rajni’s fascination with how grass-roots activism could add up to lasting change as long as the market system remains what it is.

Above all, Rajni is a storyteller. For more than forty years she has used the power of storytelling to navigate the complex interface of India’s social and spiritual fabric to affect social change.  “As a newspaper reporter, I initially enjoyed the thrill of just going out there and getting a ‘story’, any story,” Rajni says. “But that thrill rapidly faded. It was still important to record what is, but to do so from an angle and with a light that illuminates what can be. For the most part this involved making visible those people, ideas and actions that seem at first extraordinary but which actually expand our imagination in ways that empower the ‘ordinary’ in all of us.”

Rajni’s writings are profound journeys into the intellect and spirit. Her conversations reflect her deep search for truth overlaid on the breadth of her knowledge and experiences.  She started out her journey as a correspondent for a newspaper, after a BA from George Washington University and a MA from the University of Rajasthan. This stint lasted four years. For Rajni, being a newspaper correspondent felt like a profession, whereas she wanted a vocation – one that would give her the freedom to follow her instincts and not run any races.  As she mentions in one of her interviews, “The easy track is often one dimensional. If you want greater adventure and fulfillment then it is good to step off the track sometimes and wander off into the uncharted territory.”

Rajni is a child of India’s partition. Her family lived in Lahore, now part of Pakistan, during India’s independence, before the partition displaced them to various parts of India. The stories of partition became part of her family lore.

Rajni serves on the boards of Child Rights and You (CRY), Citizens for Peace and the Center of Education and Documentation (Mumbai and Bangalore). She has written several monographs including Trusteeship: Business and the economics of well-being (2016); Civilizational Gandhi (2012); An Economics for Well-Being (2007); Let’s Make it Happen: a backgrounder on New Economics (2003). She has also explored Swami Vivekananda’s writings and legacy in A Warning and an Opportunity: the Dispute over Swami Vivekananda’s Legacy (1994). She is currently on sabbatical from her role as Gandhi Peace Fellow at Gateway House: Indian Council on Global Relations, a Mumbai based foreign policy think-tank. She is also a member of the Executive Committee of the Gandhi Smriti and Darshan Samiti, an autonomous body under the Ministry of Culture.

Join us in conversation with this remarkable public intellectual and gifted storyteller!

Music. Dance. Cooking. Being with and writing about creative endeavors of those who strive to grow in joy and compassion through a depth of community bonds and laughter.

Many moments, events, people rather than one single event/ moment. High school principle who said 'if its not self-discipline its not discipline'. Parents who nourished the joy of hard work and search for multiple truths. Reading Louis Fischer's biography of Gandhi. Arriving at Sevagram Ashram. Learning at the feet of Daya Krishna and Prof. Bhatnagar. Being on the banks of the Narmada River as part of the Narmada Bachao Andolan. Being found by the Ramcharitmanas. Reading Vivekananda and thus being led to the life and miracle of Sri Ramakrishna Parmahamsa. Friendship with all those whose stories appeared in Bapu Kuti and many more who are invisibly present in that book. and everything else I've written. Walking in the mystical valleys of Dartmoor.

The neuro-physician who was treating my father in an advanced stage of Alzheimer's and gave my whole family the wisdom and courage to not artificially prolong the pretense of 'life' and instead allow my father to leave his body with peace and dignity.

Silent trek in the Himalayas. 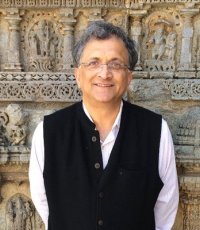