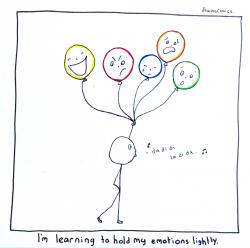 Many years ago, I walked into the kitchen of my guru’s ashram, and found him shouting at the cooks. Force- waves of anger were bouncing around the room, almost visible to the naked eye. Then, in mid sentence, he turned, saw us standing there, and smiled. The energy in his eyes went soft. ‘How did you like the show?” he asked. Then, chuckling, he slapped the head cook playfully on the back, and walked away. The cooks giggled, and went back to work, galvanized by the energy he had injected into the afternoon.
That moment changed my understanding about emotions. The clarity and fluidity with which he had shifted from intense anger to good humor was only part of it. More interesting, I felt, was the fact that he had been using anger as a teaching tool. Was he really angry? I don’t know. All I know is that he seemed able to ride the wave of his anger with perfect easiness, and let it pass without a trace.

One of the ideals of yogic freedom is detachment from emotions. It’s a basic axiom, in fact, that an advanced practitioner has perfected the ability to control, transcend, or at least be a disengaged witness of his emotions. Yet because we have so few models of what genuine detachment looks like, we tend to confuse yogic detachment with being buttoned up, or unemotional, or indifferent.

My teacher was modeling something quite different. As I saw it at the time, he was demonstrating a kind of freedom in emotions. This allowed him to work with emotional expression as an artist or an actor might work with a palette of feelings in order to inspire others, or induce a shift in the situation around him. The secret was that he was able to be conscious within the emotion.

Most people assume that a good spiritual practitioner never gets carried away by emotion -- at least not by negative emotion.

Yet the deeper truth is that spiritual practice will not eliminate negative emotions. Emotions are part of the palette of life, part of the way consciousness moves. Not only can’t you get rid of them, but you’d feel empty and impoverished if you did. Practice can change your relationship to emotions, so that instead of being swamped by certain feeling states, you can hold them, contain them, see into their essence, and ultimately, use emotions in the service of your liberation.

Seed questions for reflection: What does using emotions in the service of your liberation mean to you? Can you share a personal experience that illustrates conscious emotion? How can we develop ourselves to find freedom in emotions?