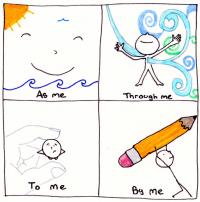 For several weeks strange sounds had drifted over the mountains from the neighboring valley. There was much talk in the village about what these noises could be, but no one could make sense of them. Even the village elders had never heard anything like them. Finally one of the young men of the village was chosen to cross the mountains and see what was going on.

After two days of hiking he reached the mountaintop and saw in the valley far below a hive of activity with dozens of people working. As he drew closer, he saw a line of people, each with a huge stone in front of them that they were hammering and chiseling.

When he finally reached the valley floor he approached a young man at one end of the line and asked, “What are you doing?”

“Huh!” grunted the young man. “I’m killing time until I get off work.”

Puzzled, the hiker turned to the second person in the line, a young woman, and asked, “Excuse me, but what are you doing?”

“I’m earning a living to support my family,” she responded.

Scratching his head, the hiker moved on to the third person and asked again, “What are you doing?”

“I’m creating a beautiful statue,” came the reply. Turning to the next person, the hiker repeated his question.

“I’m helping to build a cathedral,” came the answer.

“Ah!” said the hiker. “I think I’m beginning to understand.” Approaching the woman who was next in line he asked, “And what are you doing?

“I am helping the people in this town and generations that follow them, by helping to build this cathedral.”

“Wonderful,” exclaimed the hiker. “And you, sir? He called to the man beside her.

“I am helping to build this cathedral in order to serve all those who use it and to awaken myself in the process. I am seeking my salvation through service to others.”

Finally the hiker turned to the last stone worker, an old, lively person whose eyes twinkled and whose mouth formed a perpetual smile. “And what are you doing?” he inquired.

“Me?” smiled the elder. “Doing?” The elder roared with laughter. “This ego dissolved into God many years ago. There is no ‘I’ left to ‘do’ anything. God works through this body to help and awaken all people and draw them to Him.”

Seed questions for reflection: How do you relate to the seven different responses to work? Can you share a personal story that illustrates a deepening of your relationship to work? How can we go closer to the elder's experience in our relationship with work?

Every week, we send out a digest with a reading and inspiring stories to our global community of 93,093 people. Subscribe below.