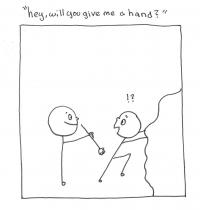 The greatest gift is the act of giving itself.  Traditionally, three kinds of giving are spoken of.  There is beggarly giving, which is when we give with only one hand, still holding onto what we give.  In this kind of giving we give the least of what we have and afterward wonder whether we should have given at all.

Another kind of giving is called "friendly" giving, in which we give openhandedly.  We take what we we have and share it, because it seems appropriate.  It's a clear giving.

Then there's the type of giving that's called "kingly" giving.  That's when we give the best of what we have, even if none remains for ourself.  We give the best we have instinctively with graciousness.  We think of ourselves only as temporary caretakers of whatever has been provided, as owning nothing.  There is no giving; there is just the spaciousness which allows objects to remain in the flow.

We've all experienced these kinds of giving in our lives; giving from us and giving to us.  We all know what it feels like when we hold on to what we give, when we're giving, attached to a particular response to the gift: "Will I be loved because I gave this gift?"  We're attached to ourselves being the giver.  It's not such wholesome giving.  We've also given when we felt it right to let something go into another's hands, just let it flow right through.  That's the kind of giving that comes through people who are healers.  They don't hold onto it -- the life energy moves right through them.  There's no one healing; there's just healing coming out.  That's the kingly kind of giving.

More generally, as we grow into ourselves, we find ourselves giving, sharing openhandedly, and honestly.  That feels good.  That bring us to the kind of friendship, the kind of love that nurtures growth.

Indeed, giving can become a whole practice in itself.  Many times in our meditation, we become beggarly and we don't give ourselves away.  We hold back, we resist certain states of mind, giving ourselves practice with the one hand, pulling it back with the other.  We're constantly checking how we're doing, measuring who we are now, evaluating.  But as we awaken, more and more we come to give ourselves away.

Stephen Levine is a celebrated author. Excerpt above from his book, Gradual Awakening.

Seed questions for reflection: How do you relate to the three kinds of giving? Can you share an experience of kingly giving from your life? What do you understand by using giving as a practice in itself?