Always Had It, Always Will 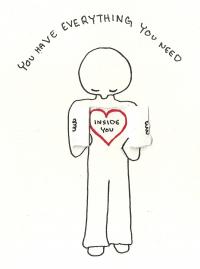 Not this crude leather; luminous beings are we!
- Yoda

What would you do if someone swore that you knew the secret of life and put you on a stage to tell it? The Totally Hidden Video television show set up a hysterical prank on precisely this theme. For the gag, a Federal Express driver was asked to deliver a package to a religious temple (fabricated by the television show). Unknown to the driver, the pranksters had taken a photo of him and replicated it as a painted portrait, depicting the young man dressed in the royal regalia of the fictitious sect.

When the delivery man arrived, the disciples (actors hired by the program) took one look at him and began buzzing excitedly.

They ushered him to the front of the sanctuary and invited him to sit on a plush cushion of honor. Then they revealed to him that he was the chosen one, the long-awaited prophet foretold in their scriptures. To allay any doubts, a servant parted the altar curtain where, lo and behold, hung the majestic portrait of the deliverer, "painted by a visionary centuries ago."

"Please," begged a disciple, "give us some words of wisdom."

The driver surveyed the portrait and looked over the throng of expectant devotees. A hush fell over the assembly. He sat down on the pillow, took a deep breath, and spoke: "Life," the sage explained, "is like a river."

The disciples "oohed" and "aahed" on the heels of his utterance, hanging fervently on every sacred word.

"Sometimes life flows easily, and sometimes you encounter rocks and rapids," the guru illustrated, "but if you hang in there and have faith, you will arrive at the ocean of your dreams."

Again the students swooned with ecstasy. More "oohs" and "aahs." This was indeed the day they had been waiting for!

"Well, that's about it," Swami Fedex curtly concluded, "I have to go now and make some more deliveries."

Reluctantly the devotees rose, bowed reverently, and sheepishly cleared the way for the anointed one. Amid profuse veneration he made his way to the door.

Now here is the amazing postscript to the story: the program played the same trick on several Fedex drivers, each of whom found profound words the moment he sat on the cushion. The invitation to wax profound brought forth the inner wisdom in these unassuming fellows. Deep within our heart, each of us knows the truth. The answers we seek, the power we strive for, and the acknowledgement we attempt to gain, abide inside us. Given the opportunity (being placed on the cushion) or the challenge (being pushed against a wall) we know what we need to know, to do what we need to do.

Seed questions for reflection: Imagine this prank were played on you - what would your deepest words of wisdom be? When receiving the honor that the drivers received, how do we also keep their awareness that deliveries have to be made, and avoid getting trapped by the attention we get? Can you share a personal story of a time when you were expected to share your deepest wisdom, and what arose in response?