The Test for Meditation in Action 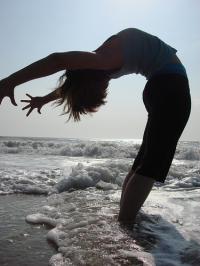 The process of going from infancy to adulthood could therefore be called the process of forming a solidified sense of self. Some adults decide to start growing again, that is, to go from being an adult to being a super-adult. In order to do that, one has to learn the process of unsolidifying the sense of self.
The unsolidified self (which could be called the big self or the no-self) begins to arise within the super-adult. That no-self has to gradually learn how to deal with more and more complex aspects of life, just as the solidified self did.
At the beginning, the no-self may not be able to do anything except sit there --or maybe chant. Gradually the no-self learns how to do more complex things, like, maybe, sweep the yard. Eventually it learns how to talk, how to drive a car, how to carry on contract negotiations, and anything else that needs to be done. But, just as for the self, it takes a while for that no-self to learn how to do things. Eventually most of ego's activities get taken over by the no-self activity. The no-self knows full well how to get out of the way of trucks.
There are two ways that people can fool themselves. One is "I have to sit in a certain posture, and have the body absolutely aligned perfectly in order to meditate".  The second is "I don't ever need to sit in a posture like that; I meditate in daily life".
The way that you know if you're meditating in action is to see if you can stop on a dime any time you want. You should be able to go, at any time, into an absolutely stable, motionless state without struggle if you're really "meditating in daily life."
--Shinzen Young, from an Interview with Charles Tart

Every week, we send out a digest with a reading and inspiring stories to our global community of 93,200 people. Subscribe below.