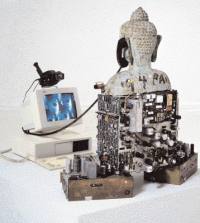 "How many of you know how to watch television?" I asked my class one day. After a few bewildered and silent moments, slowly, one by one, everyone haltingly raised their hands. We soon acknowledged that we were all "experts," as Harold Garfinkle would say, in the practice of "watching television."

For an experiment, students were asked to watch TV consciously. Insofar as this is sort of "Zen and the Art of TV-watching," I said to them, "I want you to watch TV with acute awareness, mindfulness, and precision. This experiment is about observing television scientifically, with `Beginner's Mind,' rather than watching television passively with programmed mind. Ordinarily, if you are watching TV, you can't also observe and experience the experience of watching TV. When we watch TV, we rarely pay attention to the details of the event. In fact, we rarely pay attention." The purpose of our un-TV experiment is to provoke us into seeing television as opposed to merely looking, and to stop the world as the first step to seeing. Here we engage in stopping the world by stopping the television. 1) Watch any TV show for 15 minutes without turning on the sound. 2) Watch any news program for 15 minutes without turning on the sound. 3) Watch television set for one half-hour with out turning it on.

Almost every household's living room is arranged around the television set. As a weight room is arranged for weight training, our living rooms are arranged for TV training. The furniture is purposely arranged for the transcendent practice of "watching TV," rather than for the immanent, human practice of communication or interaction. The interior design of the average American living room with its lines of attention, hierarchy, and transcendent TV is very similar to the interior design of the average American church with its transcendent altar, lines of homage, and gestures of genuflection.

Marshall McLuhan says TV opens out onto an electronic global village. It would seem, rather, that it gives us only the illusion of being. It reinforces security by presenting danger, ignorance by presenting news, lethargy by presenting excitement, isolation by promising participation. The media confines reality to itself. And it limits knowledge by giving the illusion of knowledge. In the same way that the most effective way to deflect, diffuse, and terminate a social movement is to announce that it has been achieved (the feminist movement must contend with this on an almost daily basis), the most effective way to deflect inquiry is to present it as fulfilled. TV acts in this guise as a thinking presentation device that offers non-experience as experience and not-knowingness as knowing.

In the words of Mat Maxwell, "Television becomes the world for people. ... The world becomes television." The overall and cumulative effect of the media is to heighten our insensitivity to reality. Rather than breaking the chains of ignorance, political domination, and illusion in our Platonic cave, something insidiously similar yet different is going on. Instead of actually turning away from the shadows to see the realities, instead of actually leaving the darkness of the cave and going up into the sunlight, we merely watch an image of ourselves doing this, we fantasize about doing it, and think it's the same.

Every week, we send out a digest with a reading and inspiring stories to our global community of 93,496 people. Subscribe below.