The Act of Giving is the True Gift 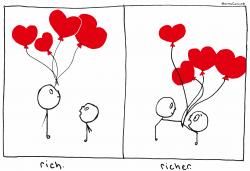 In an ancient Indian epic, Arjuna, a famed warrior questions his divine charioteer, Krishna, about the noblest giver in the land. "Karna is without doubt the finest example of generosity in the kingdom," Krishna informs him. The answer irks Arjuna. Karna is one of his biggest rivals on the battlefield. He frowns deeply and says nothing. Krishna, noticing Arjuna's furrowed brow and the competitive gleam in his eyes, hides a smile. The subject is dropped for the time being, but several days later, Krishna devises a skillful test.

"Do you see those two mountains ?" Krishna asks Arjuna, as they are riding together one evening. As Arjuna turns his gaze, the tall peaks in the distance begin to shimmer and reflect the light. The two mountains have turned into solid gold. "Now Arjuna, I have a task for you," says Krishna, " You must distribute these two mountains of gold among the poor villagers who live in the foothills. Let me know when you have given away every last pebble of it."

Excited by this opportunity to impress Krishna and the world with his philanthropic abilities, Arjuna summons all the villagers together and addresses them grandly. "Listen," says Arjuna, "For I bring glad news. I will be distributing these two glorious mountains of gold amongst all of you." A gasp of wonder and delight rises from the audience, and the air fills with songs in praise of the great warrior Arjuna. Energized by the admiration Arjuna sets about creating a master plan for the collection and distribution of the gold.

For two straight days and nights he shovels gold ceaselessly from the mountain. Not stopping an instant for food, water, rest or sleep. And yet, to his bafflement and utter dismay, the mountains remain undiminished. The more he shovels the more there remains. Forced to the brink of exhaustion, he seeks Krishna out.  "I must take a few days of rest before I continue," he confesses wearily.

In response, Krishna summons Karna into his presence. "Do you see those two mountains?" Krishna asks of Karna. "Yes," returns the noble warrior. "You must distribute them among the poor villagers who live in the foothills. Let me know when you have given away every last pebble of it." Without a moment's hesitation Karna calls out to two villagers who happen to be passing by at that moment. "Do you see those two mountains?" Karna asks them. "Yes," comes the response. "Those two mountains of gold are yours to do with as you please," says Karna with a smile bright as the sunrise. And just as easily as he utters these words, he bows to Krishna and walks away.

Arjuna sits dumbfounded by this turn of events. Krishna turns to him, his voice rich with a love and wisdom beyond the ages. "Arjuna -- in your mind the gold occupied a place of high value, and you were sub-consciously attracted to it. You had a muddied approach to giving. You tried to strategize and divide up the gold according to who you thought was most worthy of the gift. But these petty calculations tired your spirit, and over time, you were forced to realize that the mountains' abundance is far beyond the capacity of your individual head, heart and hands." Arjuna silently absorbed the truth of these words into his being.

"And what about Karna?" he finally ventured to ask. "The gold meant nothing to Karna," returned Krishna easily, "For him the true gift was not the gold but the act of giving in itself. He had no calculations to make, nor was he seeking anything in return by way of acknowledgement or praise. He offered everything with a clear heart and a pure mind, and having given he moved on to meet the next moment. And that, dear Arjuna, is a true sign of a person on the path of Awakening."

Every week, we send out a digest with a reading and inspiring stories to our global community of 93,418 people. Subscribe below.