The Theory Behind Forgiveness 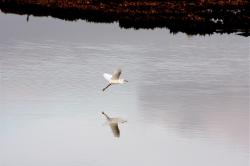 I always liked the Course's reliance upon forgiveness as a way to remeber the true Self. This is a somewhat unique approach, found in few of the other great wisdom traditions, which usually stress some form of awareness training or devotion. But the theory behind forgiveness is simple: The ego, the separate-self sense, is not just a congnitive construct, but also an affective one. That is, it is propped up not just by concepts but by the emotions. And the primal emotion of the ego, according to this teaching is fear followed by resentment. As the Upanishads put it, "Wherever there is other, there is fear."

In other words, whenever we split seamless awareness into a subject versus an object, into a self versus an other, then that self feels fear, simply because there are now so many "others" out there that can harm it. Out of this fear grows resentment. If we are going to insist on identifying with just the little self in here, then others are going to bruise it, insult it, injure it. The ego, then, is kept in existence by a collection of emotional insults; it carries its personal bruises as the fabric of its very existence. It actively collects hurts and insults, even while resenting them, because without its bruises, it would be, literally, nothing.

The ego's first maneuver in dealing with this resentment is to try to get others to confess their faults. "You hurt me; say you're sorry." Sometimes this makes the ego feel temporarily better, but does nothing to uproot the original cause. And, as often as not, even if the person does apologize, the likely result is now hatred of them. "I knew you did that to me; see you just admitted it!" The fundamental mood of the ego: never forgive, never forget.

What the ego doesn't try is forgiveness, because that would undermine its very existence. To forgive others for insults, real or imagined, is to weaken the boundary between self and other, to dissolve the sense of separation between subject and object. And thus, with forgiveness, awareness tends to let go of the ego and its insults, and revert instead to the Witness, the Self, which views both subject and object equally. And thus according to the Course, forgiveness is the way I let go of my self and remember my Self.

I found this practice extremely useful (...) My ego was so bruised, so injured -- I had collected so many insults (real and imagined) -- that forgiveness alone could begin to uncoil the pain of my own self-contraction. The more I got "hurt", the more contracted I got, which made the existence of "others" all the more painful, which made bruises all the more likely. And if I felt I couldn't forgive others for their "insensitivity" (in other words, the pain caused by my own self-contracting tendencies) then I used another affirmation from the Course: "God is the love with which I forgive."

- Ken Wilber from "Grace and Grit"

Now.I just understood the power of forgive after reading this article.before,i find it very difficult to overlook peoples wrong and i also find it hard to forgive but now i understand what forgiveness is all about and i believe through this ,my life is gonna change positively.Thanks

I am in a relationship being challenged by my partners problems with sobriety. I live in almost constant fear, is she high, is she loaded, is she lying to me. I love her. I want to forgive her. But the day to day terror and wondering are reducing me to a terrified wreck. I know it is the sickness and not the person. I liked this reading because it gives me a way to ease the pain of resentment I feel at times. It feels like a losing battle. Thanks for this wonderful message.

i want to give an exmaple about the qulity og the forgiveness.a person is very bad with you and he/she always do nonsence things with you but you dont get furious and you forget his/her mistakes and you are doing good things for that person who is bad for you and you for give him/her.i am quite sure one day will definatly come he /she will relize his/her misstake and he will regreat on hisself.and you will become a respective person for his.

@ganoba Date, what you do is right, but you just insist that the term forgiving can refer to nothing else but a false understood forgiving which is not a forgiving.

you must make a distinction between "pain" that arises in the moment, which is ment to be withnessed (without the need of beeing related to someone else) and the "pain" (despair) that you create by holding the idea that you can not be at peace with the moment, because you define your self as detemined by the past, rather than you present moment. forgiving means leaving the location of psychic time and entering the moment. eckhard tolle adresses common misunderstandings about this in the (audio) book power of now.

There's no need to forgive if you never hold anything against anyone in the first place. Let's be real about the other and his/her (possibly malicious) intentions as best as we are able to surmise, but then go and treat him/her the best. In a sensible way -- not suggesting to encourage an abuser to abuse more.

(There's a lot of "ego-forgiveness" going around: people forgiving mainly to free themselves from the burden of resentment. I have faced severe abuse and dealt poorly with it for a long time but, c'mon, if the other is someone too, just as I am someone, even if (s)he has just done something (maliciously) foolish... Why be so locked into the little finite human form I inhabit?)

Forgiving reinforces the ego, the sence of a separate self, that sits on judgment over others and finds them wanting.
forgiving in effect says," You have hurt me. You are nasty but I in my magnanimity choose to ignore it."
Isn't that ego speak?

If and when I feel hurt, physically or emotionally, I try to use all available enrgy to heal, that is to remove the sense of separateness. The extent to which I feel oneness, to that extent the feeling of hurt is dissolved.

Was sent this today and since we talk about stuff like this all the time, thought you'd enjoy a ponder.
xx

Forget - you can't BUT Forgive you must ! Must begin somewhere !