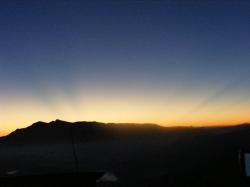 True meditation has no direction, goals, or method. All methods aim at achieving a certain state of mind. All states are limited, impermanent and conditioned. Fascination with states leads only to bondage and dependency. True meditation is abidance as primordial consciousness.

True meditation appears in consciousness spontaneously when awareness is not fixated on objects of perception. When you first start to meditate you notice that awareness is always focused on some object: on thoughts, bodily sensations, emotions, memories, sounds, etc. This is because the mind is conditioned to focus and contract upon objects. Then the mind compulsively interprets what it is aware of (the object) in a mechanical and distorted way. It begins to draw conclusions and make assumptions according to past conditioning.

In true meditation all objects are left to their natural functioning. This means that no effort should be made to manipulate or suppress any object of awareness. In true meditation the emphasis is on being awareness; not on being aware of objects, but on resting as primordial awareness itself. Primordial awareness (consciousness) is the source in which all objects arise and subside. As you gently relax into awareness, into listening, the minds compulsive contraction around objects will fade. Silence of being will come more clearly into consciousness as a welcoming to rest and abide. An attitude of open receptivity, free of any goal or anticipation, will facilitate the presence of silence and stillness to be revealed as your natural condition.

Silence and stillness are not states and therefore cannot be produced or created. Silence is the non-state in which all states arise and subside. Silence, stillness and awareness are not states and can never be perceived in their totality as objects. Silence is itself the eternal witness without form or attributes. As you rest more profoundly as the witness, all objects take on their natural functionality, and awareness becomes free of the mind's compulsive contractions and identifications, and returns to its natural non-state of Presence.

The simple yet profound question, "Who Am I?," can then reveal one's self not to be the endless tyranny of the ego-personality, but objectless Freedom of Being - ”Primordial Consciousness in which all states and all objects come and go as manifestations of the Eternal Unborn Self that YOU ARE.

Raaga Mayuri, the name behind many beautiful apartments, villas and commercial complexes in Kurnool and Gadwal, now introduce you to a unique housing concept that matches your dream and needs. Raaga Mayuri is designed to offer you a golden future.

Ur "Innerself" in itself is True Meditation. Meditation can be done in many ways... it can be   done by chanting or by focusing an object or by perceiving silence but the main objective of all these types is to awake ur conciousness; what we call as "Inner Conciousness". So the real state of mind of ur self can bring urself to True Meditation. And If possible do try this!!

Beautiful piece. Simply the best! You have completely explained what meditation is not; the balance is what it is not.

Yet to see and experiance