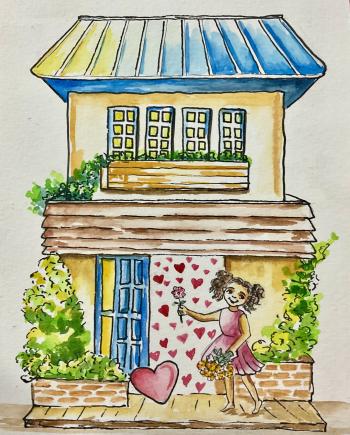 My husband, children, and I have lived in 7 countries for the last decade and a half. We have always been the strangers knocking on new neighbors' doors while simultaneously communing with the strangeness of the mixed feelings of being the newcomers. Over time, the ability to open up unguarded has become crucial to settling in and feeling at home in different parts of the world. I remember a timely lesson about strangers in 2009 during a move to the Philippines from Nepal. Our oldest was 3 years old. She was accustomed to chatting with strangers in public places such as street markets in the back alleys in Kathmandu. She naturally sauntered up to the hotel staff and introduced herself. She then relayed our entire family story, giving away specific details such as: our mixed nationalities, ages, family size, her little brother's birthday, which country he was born in, and even where the grandparents lived in Kenya and the US. She could have easily given out phone numbers too if she had memorized them!

This was the first time that it occurred to us that our daughter and her then toddler brother could not honestly differentiate between strangers and familiar faces. As far as the little 3-year-old was concerned, everyone she met was a friend. I was uncomfortable with her ease around strangers. Yet, I was also uncomfortable with the idea of teaching her about stranger danger.

So we came up with a compromise. I found a way to teach her to "read" the room inside her heart. I wanted her to learn how to tap into her natural intuition to sense real safety versus real danger. I told her she had to breathe three times (being 3 years old at the time) and when exhaling to pay attention to how fast or slow her heart was beating. Did she feel comfort or discomfort? Could she identify which feeling was strongest and why? Did her surroundings look and feel safe? She could then decide if to pour out her story to an unfamiliar face. I told her she had to know if her heart could create room for the stranger's story in the way she asked a stranger to make room for her.

It dawned on me then that welcoming a brand new person into your life is an art of subscribing to a particular lifestyle aligned with collective values. When we socialize (the art of meeting and inviting strangers into our lives), we do so to enjoy being with other human beings like ourselves. We look for shared values, similar cultural references, and even similar lived experiences. However, when we overthink or over-profile others, there's a possibility that the driving agenda is to ensure they fit into some story about yourself that you want to project to the world.

Socializing for the sake of pleasing yourself can't be a way of life - the important part of socializing is being alive and open to chance encounters that will breathe new ideas about how to manifest the best version of our collective humanity. It is impossible to know for sure whether opening up to a stranger or to the strangeness within will bring joy or suffering, but with trial and error, we become masters at spotting authenticity -- in ourselves and in others.

Just like a little child, we have to live in such a way that our encounters with all kinds of emotions and people emerge from the authentic life we are living, free of negative judgments- about ourselves and others. Nothing about our inward or outward appearance needs to be tidied up to become acceptable or inviting. Simply being who we already are and accepting the space we occupy in that moment when we encounter that newness is enough to be welcoming to strangers.

Wakanyi Hoffman is an artist of life who paints the shades of each day as a storyteller, author, mother, global citizen, journalist, and keeper of indigenous wisdom.

SEED QUESTIONS FOR REFLECTION: What kind of lifestyle have you subscribed to, and how does your physical life harmonize with your internal life? Can you share a personal story of a time you took stock of your inner world and then harmonized your outer action? What helps you truly welcome the stranger at the door of your heart and the one at the door of your home with no strings or judgements attached?

Wakanyi,
Such a beautiful, insightful reflection... I'd love to meet your 3-yr old! My own life has been incredibly enriched by the strangers I've met and their various cultures . I am certain we could all learn a lot from your daughter, too. Thanks for sharingI

I decided a few years ago to smile at or speak to every person I passed within "ear shot." To my surprise more people responded positively by speaking back and offering a smile of appreciation. To those who speak back, I take the time to wish them a great day! And again, they respond in kind. These exchanges confirm forme that to be human is to be relational. Thanks for this story.

Being born into separation in this life, we come to see ourselves in relation to (and from the perspective of) that which surrounds us: family, society, culture, and environment. My experiences of those as safe or unsafe, affirming or hurtful, supportive or destructive shapes my perception of, and relation to myself as well, with those experiences and stories shaping my visible "conventional self". To remain limited to that "conventional self" becomes increasingly unsatisfactory with age! Just as the 3-year old in the passage learned to breathe and see a larger perspective, insight meditation provides a powerful tool to recognize the role of past experience, as well as the Love which extends infinitely beyond...

I subscribe to caring. Interpreting my "internal life" to mean what I am experiencing in a given situation, my physical life harmonizes with that naturally, and sometimes that shows and sometimes I try to not let it show. I interpret my "inner world" to also mean what I am experiencing in a situation, and I sometimes harmonize my outer action to that and sometimes force myself to act in a way that is not in harmony with my inner world. For example, I have felt anxious or scared or irritated in my inner world and forced my outer action to hide that and act otherwise. What helps me welcome strangers is that I genuinely care, which I value, and I am fairly good at being present and not behaving with strings attached. Having strings attached is conniving. Judgments happen, I know I can be judgmental, and it helps me to acknowledge all that and take my judgments into consideration while being open and welcoming with some cautiousness.