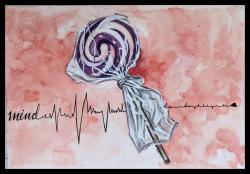 It is the ambiguity of violence, that we can pull a trigger as an act of hideous aggression or of self-sacrificing love, that is so challenging. As a result, violence will always be a part of the human experience that is profoundly hard to understand. The biologies of strong love and strong hate are similar in many ways, which is we don’t actually hate aggression -- we hate the wrong kind of aggression but love it in the right context.

My wife and I were in the minivan once, our kids in the back, my wife driving. And this completely reckless driver cuts us off, almost causing an accident, and in a way that makes it clear that it wasn’t distractedness on his part, just sheer selfishness.

And suddenly my wife announces that we’re going to follow him, make him a little nervous. I’m still furious, but this doesn’t strike me as the most prudent thing in the world. Nonetheless, my wife starts trailing him, right on his rear.

After a few minutes the guy’s driving evasively, but my wife’s on him. Finally both cars stop at a red light, one that we know is a long one. Another car is stopped in front of the villain. He’s not going anywhere.

Suddenly my wife grabs something from the front seat divider, opens her door, and says, “Now he’s going to be sorry.”

I rouse myself feebly—“Uh, honey, do you really think this is such a goo—” But she’s out of the car, starts pounding on his window.

I hurry over just in time to hear my wife say, “If you could do something that mean to another person, you probably need this,” in a venomous voice. She then flings something in the window. She returns to the car triumphant, just glorious.

"What did you throw in there!?" She’s not talking yet. The light turns green, there’s no one behind us, and we just sit there.

The thug’s car starts to blink a very sensible turn indicator, makes a slow turn, and heads down a side street into the dark at, like, five miles an hour.

If it’s possible for a car to look ashamed, this car was doing it.

“Honey, what did you throw in there, tell me?”

She allows herself a small, malicious grin. “A grape lollipop.”

I was awed by her savage passive-aggressiveness —“You’re such a mean, awful human that something must have gone really wrong in your childhood, and maybe this lollipop will help correct that just a little.”

Robert Sapolsky is a world-renowned neuroscientist and long-time professor at Stanford, who has spent decades studying violence. This story is from the opening of his best-selling book  'Behave'. Explore more on this topic via this talk.

SEED QUESTIONS FOR REFLECTION: How do you relate to the notion that the context of aggression matters? Can you share an experience that involved the 'right' kind of aggression? What helps you tinge even your aggressive moments with love?

Best to let this sort of thing go. There is an equal chance that the driver of the other vehicle responds violently especially to a female.

Robert Sapolsky is an amazing human being and neuroscientist.

He is also one of many scientists who profess to be atheists. I suspect that attitude is due mostly to “bad” religion? I might also suggest that most atheists are actually agnostic, especially the scientists. Even Einstein knew he didn’t know.

Having abandoned religion myself during college, I “returned” later though with a very different perspective on spirituality. I have remained a scientist through it all.

It is true that behind most if not all human evil is brokenness.
That said, we must exercise great caution and compassion when confronting it.

Love the intention of giving sweetness to someone. My concern is forbthe kiddos in the car.

The Tree Bears Witness
Triggering moments are tricky.
Was it the single finger, the blaring horn, the sudden, scary interruption without signal?
Many assumptions and nosingle story to make us whole.
I know them, hold them, ancient and anchored in my roots.
Who is the “thug,” the “villain,” the “reckless, selfish” one,the passionate, protective parent?
Please — no need (or knees) for police in a fearless land of purple lollipops.May wepause andbreathe,letgrace and my prayer-filledbranches love us all sweetly home.

This is a beautiful way of paying back wrong aggression...with that type of sweet aggression...Thank you so much!

Aggression is the manifestation of fear. Human beings are sentient beings and as a resolved person I can chart the journey of how the deluded mind moves from not understanding something to fear to aggression.
It is the science of the human soul the life atom. If this knowledge can be explained understood and practiced by just a group of families it will attract the attention of the world and spread like a wild fire.

You just need resolution and there will be no aggression in society. The aggression starts in the thoughts and the seed is the perceived reality that is by itself a delusion.

Join me in finding your own resolution and help others become resolve seeing your state of permanent bliss which ia what even the person doing the aggression needs.
ananddamani.com
howtogivemore.com

With Love Not Aggression

This piece made me feel very uncomfortable. I am uncertain the wife's actions were wise, and seemed not non-violent to me. Especially that children were in the car watching and experiencing what was being modeled. Second, calling the other driver a villain, also does not seem non-violent. We don't know what we don't know.

Gosh, I would need to take a breath and choose my response carefully with so much and so many lives at stake. With love, always. Liz

Aggression means hostile, violent, attacking. For me, the context of aggression doesn't matter. Aggression meaning hostile or violent is always unnecessary and probably harmful. I don't have an experience of the right kind of aggression or violence. I've had experiences of being aggressive, and for me they weren't right and I regret them. Being aggressive is fitting in war because, as I see it, both aggression and war are harmful and wrong. Various institutions and groups find a rationale to make aggression justifiable in certain contexts -- I don't. I support being active, assertive, strong, firm, disagreeing, objecting -- those aren't violent (unless done violently). When I've been aggressive or violent,it hasn't been tinged with love, it's been nonlove, fearful and harmful. For me, when there is love there isn't aggression, there's healing and union.

My stance on aggression and violence is to respond to violence with non-violence and hate with love. Mahatma Gandhi, Martin Luther King Jr and Dalai Lama are living examples of implementing this philosophy. I have not encountered heavy duty aggressive behaviors in my life. A couple of times I had run into aggressive car drivers cutting me off on highways. I let them pass by praying for their safety and the safety of other drivers like me. There are
aggressive drivers on roads. It does not make sense to react to them aggressively.