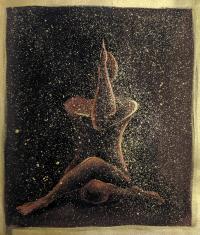 Initially, I used to move from willpower; I was concerned only with results. In retrospect, I realize that this created a sort of tunnel vision; my consciousness was debilitatingly limited. I allowed myself to be driven by the wants and automatic patterns I had developed in day-to-day activities. Eventually, I became rather tired of these patterns and wanted to change my behavior through my yoga practice -- and also the development of relaxation.

The most important realization for me was that willpower is directed through thinking, while relaxation can only be felt. This realization and the experience of movement being initiated by relaxing certain muscles gave me enormous focus.

However, I did not know exactly how to develop this focus: should I approach it through my ego-bound decisiveness or through something else, something in my body? I noticed that I could couple the feeling of letting go with my breathing. That worked. It created a shift in my behavior, a shift from an ego-bound, cognitive control (willpower) to an emotionally bound, physical control whereby the focus of the movement was maintained. I developed the routine of connecting myself with essential technical points of attention in every asana movement -- with relaxation as the central point within these directives.

I felt that I had found the solution for a complicated problem: if I allowed myself to complete the asana purely from feeling, then there was a risk that my technique would suffer, but if I focused on technically correct movement, willpower would take over. As it turned out, neither happened: I was able to maintain the correct technique and remain relaxed. This also became the way for me to release my tunnel vision. My thoughts became quiet and I was able to view the experiences of my body in an open, respectful manner. Through this experience with consciousness, and because I confronted my tension in an entirely new way, I was able to attain a new, higher level of consciousness. I was able to approach my tension from a feeling of relaxation together with a positive contact with my body. The "I"-focused, old manner, which was based on desires and driven by willpower, felt hard and aggressive when compared to this new experience.

I got the feeling that I was no longer the initiator of the movement: I felt how my body reacted to the focus of relaxation and movement initiated through my breath. I was able to observe this peacefully, without interfering, like an interested spectator.

At a certain moment, I felt that my body itself started to organize the movement. It was an awe-inspiring and, above all, totally physical moment.

My body underwent a transformation, and I became very warm. I felt light and full of energy and sensed a transparent connection with the space around me. This new development in my consciousness felt like a lightbulb suddenly went off. I was so surprised by this that my thoughts immediately took over, causing the experience to end. Luckily, I found that by starting over at the beginning (body consciousness) and without longing for this particular end result, I could replicate the experience.

I was less surprised the second time and so was able to lengthen the experience. It felt like an unsteady (but not frightening) connection with myself. Slowly, I regained a clearer overview of the situation without losing the physical sensations. This 'gathering" of myself felt complicated because I was eager to return to my habitual manner of movement -- namely, control. And control was the one factor that immediately stopped the experience. When I was able to continue moving without losing the sensations in my body, I once again experienced a large shift in consciousness. This could be described as higher consciousness.

Such experiences on a regular basis may well change your point of view in life. You will become more compassionate toward other people and the world in general, and you will cease to feel that you are alone. Returning to your self is like coming home.

Gert van Leeuwen is the founder of Critical Alignment Yoga and Therapy, and the director of two schools in Amsterdam and Russia. The excerpt above is from his book, Yoga: Critical Alignment. You can learn more via his Awakin Call interview.

SEED QUESTIONS FOR REFLECTION: How do you relate to the notion that willpower is directed through thinking, while relaxation can only be felt? Can you share a personal story of a time you were able to release tunnel vision and open into new spaces of relaxation? What helps you view the experiences of your body in an open, respectful manner?

Will power seems to be a part of the Ego network. All my life I have been ambitious and made lot of success. But what good it is if I am not enlightened. May be this too is a part of ego!!!

this is so well written and really captures the idea of letting go of control and fear and allowing our body to open it up to the energies that we seek. In our busy busy world it seems unsafe at times but in truth if we are controlling and thinking then we are part of the busyness. It is indeed a wonderful feeling to be sitting on the deck in the sun beam and allowing a bigger knowledge than the mind to accept that we will feel even safer by having less control, By allowing the mine to be silent and the body to open it self up to every ounce of the Divine matrix energy. When it happens it alters my entire sense of self.

We use language (past) and thinking for objective description to reveal which is beyond itself, that is to say, all verbal formulation of intuitional apprehension obscures rather than reveals what has been apperceived.
Question is how do you relate to the notion that willpower is directed through thinking, while relaxation can only be felt?
It is thinking(functioning awareness) thinker (conceptual entity) and thought(pointing to object) triad in every conceptual thinking, how a thinker can have will power or volitional freedom in this triad as a thinker? If we live knowing and acting with this truth than life felt relaxation. We live life as an entity repeat past knowledge or apparent appearance. shadow can not chase the source. Krishnamurti said " The 'me' is created by thought and the 'me' says: "I am independent of thought".

Tunnel vision narrows my view and outlook. It comes in the way of seeing the whole picture. I have realized from my own experiences how my way of thinking and my energy is indeed blocked and wasted by not looking at the whole picture. Life is multifaceted and multidimensional. When I look at the problematic situation holistically, I find better ways of easing or releasing my stress. As the author Gertvan Leeuven says, " Returning to yourself is like coming home."

Non-judgmental awareness of what is happening in my body, mind and heart and my actions helps me make wise choices. It helps me to relate to my body with open and respectful hands.
Namaste!
Jagdish P Dave[Hide Full Comment]

I agree that willpower is directed through thinking. Willpower is a goal-directed head strong tunnel vision activity. Relaxation can be not directed by thinking, and can be directed by thinking. Relaxation can definitely be felt. Thinking can't be felt; the results of thinking can be felt. Thinking can direct without being willpower, just like the body can be used without there being tension. Relaxation can be organized by the body. Longing and trying can definitely interfere if not preclude. I don't tunnel vision and do open into new spaces of relaxation when I am present, noting and responding to what is happening, with no agenda and not trying to control or accomplish anything. What helps me view the experiences of my body is doing it, that is, practice, spending time paying attention in a nonjudgmental, respectful, not goal-directed, noncontrolling way to what I am experiencing in my body. It also helps to know that present nonjudgmental awareness is medicine.