If It Can Suffer, It's Real 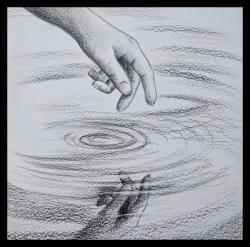 Many people believe that truth conveys power. Unfortunately, this is just a comforting myth. In fact, truth and power have a far more complicated relationship, because in human society, power means two very different things.

On the one hand, power means having the ability to manipulate objective realities: to hunt animals, to construct bridges, to cure diseases, to build atom bombs. This kind of power is closely tied to truth. If you believe a false physical theory, you won’t be able to build an atom bomb. On the other hand, power also means having the ability to manipulate human beliefs, thereby getting lots of people to cooperate effectively. Building atom bombs requires not just a good understanding of physics, but also the coordinated labor of millions of humans. Planet Earth was conquered by Homo sapiens rather than by chimpanzees or elephants, because we are the only mammals that can cooperate in very large numbers. And large-scale cooperation depends on believing common stories. But these stories need not be true. You can unite millions of people by making them believe in completely fictional stories about God, about race or about economics.

When it comes to uniting people around a common story, fiction actually enjoys three inherent advantages over the truth. First, whereas the truth is universal, fictions tend to be local. Consequently if we want to distinguish our tribe from foreigners, a fictional story will serve as a far better identity marker than a true story. The second huge advantage of fiction over truth has to do with the handicap principle, which says that reliable signals must be costly to the signaler. Otherwise, they can easily be faked by cheaters. If political loyalty is signaled by believing a true story, anyone can fake it. But believing ridiculous and outlandish stories exacts greater cost, and is therefore a better signal of loyalty. If you believe your leader only when he or she tells the truth, what does that prove? In contrast, if you believe your leader even when he or she builds castles in the air, that’s loyalty! Third, and most important, the truth is often painful and disturbing. Hence if you stick to unalloyed reality, few people will follow you. An American presidential candidate who tells the American public the truth, the whole truth and nothing but the truth about American history has a 100 percent guarantee of losing the elections. The same goes for candidates in all other countries. How many Israelis, Italians or Indians can stomach the unblemished truth about their nations? An uncompromising adherence to the truth is an admirable spiritual practice, but it is not a winning political strategy.

For me, maybe the most important question, both as a scientist and as a person, is how to distinguish between fiction and reality. I'm not suggesting that everything is fiction, but that it's just very difficult for human beings to tell the difference between fiction and reality. It has become more and more difficult as history progressed because the fictions that we have created -- nations and gods and money and corporations -- now control the world. Even just to think, "Oh, these are all just fictional entities," feels quite difficult.

Yet, there are several tests to tell the difference between fiction and reality. The simplest one is the test of suffering. If it can suffer, it's real. If it can't suffer, it's not real. A nation cannot suffer. That's very, very clear. Even if a nation loses a war, we say, "Germany suffered a defeat in the First World War," it's a metaphor. Germany cannot suffer. Germany has no mind. Germany has no consciousness. Germans can suffer, yes, but Germany cannot. Similarly, when a bank goes bust, the bank cannot suffer. When the dollar loses its value, the dollar doesn't suffer. People can suffer. Animals can suffer. This is real.

Yuval Noah Harari is a historian, meditator, and author of multiple best-selling books including Sapiens and Home Deus. Excerpt above is edited based on various sources, including his Ted Dialogue.

SEED QUESTIONS FOR REFLECTION: What comes up for you when applying the reality test: 'if it can suffer, it's real' to any ideology? Can you share a personal story of a time you were able to apply this test when making an important decision? What helps you avoid getting impervious to the suffering of others?

Depends on what you consider as real.
Real as in tangible or experienceable, or Real as in what's not transient.
By the second definition, I would say the entity that is suffering is itself not real.
The self-realized ones don't suffer.
So maybe the title of the article should be: If it can suffer, 'it' is not real ?

Very interesting piece for sure. I feel at the core of this passage is a need to accept that everything in this world has consciousness. Just at a varied level, but everything that exists are at different levels in the spectrum of consciousness.

False and Truth, Right and wrong debates have existed for ever. Everyone's perspective depends on the data point and situation rather than an absolute truth. We attach value to the source of truth based on our own experience with the source.

Coming to the discussion on suffering, that too has its opposite. If there is suffering, there is also joy. Now again comes the debate on true joy and false joy like truth and news have received similar versions.

One can also ask, " Is suffering natural?" So, the QBQ that begs to be asked is "Is all suffering real?" Hence is suffering alone an indication of reality? It is said Purity is the essence of Reality.....

The persons in the decision-making roles don't want to suffer the consequences of the harm that their practices inflict, so they create a corporation, or a nation, which cannot suffer. No individual will be incarcerated for contributing to the suffering and demise of millions in the service of profit by covering the destruction with a banner of a corporate entity, which obvious cannot suffer because it is not physical. The employees of that corporation can be let go (suffering?). The share holders can lose money (suffering?), but can the highest level executive decision makers actually go to jail, wear the orange jumpsuit, and sit in the cell for years? I believe the creation of the corporate entityensures that no individual decision maker may be held accountable for the damage to the sentient beings, human, animal, plant (research shows they are sentient) rocks (?), (they do produce vibrational frequencies, LCD etc) that they harm or destroy.

It's a trick to externalize the consequences of their greed. Like the Coca-Cola company, the largest manufacturer of plastic bottles, lobbies to make laws that protect it's top executives from legal liability, and puts the onusof recycling on the end user versus fixing the problem at the top. It's overwhelming to be responsible for the fact that everything we use and drink comes in a single use plastic bottle, which ends up in the ocean or the landfill for God knows how long. Yet, Coca-Cola keeps on quietly churning out billions of new bottles. What if our world decided that it was a crime to manufacture things without a plan to safely unmanufacture them?

Externalization of the negative consequences of greed and power. That seems to be the purpose of these fictional entities.As it stands, the driving force is shareholder profit, and externalization of risk and harm.

I believe that if our contrived laws, often created by richest and most powerful organizations in their own service, were scrapped in favor of individual accountability for damage-inflicting practices, much, much more thought and apprehension would come into play prior to enacting policies. This would be a different world. A better world.[Hide Full Comment]

Eloquent and true as far as it goes, but I think it applies well to the domain of human beings and animals but fails to account for the suffering of this planet, which seems real to me. Or rather, it would be difficult to apply the test and readily sort truth from fiction and metaphor regarding Gaia. Is the Gaia hypothesis only a lovely metaphor ? Or is the earth itself suffering when it's systems fall apart, rivers dry up, trees die and burn? This is not the same as saying Germany or a bank is suffering. This planet is not an abstraction or a metaphor. Yet I still think the author is on to a valuable distinction.

In my experience, truth does foster personal power. Truth isn't necessary to manipulate anything. I believe earth was conquered by homo sapiens because we are foolish, not because we can cooperate. Large scale cooperation may be based on belief in common stories, but not always. And you can't really make anyone believe anything. Believing a leader who promotes a false story is foolish loyalty. Yes, the truth may hurt -- lies may hurt also. Fiction wins in politics when voters don't want the truth. It sometimes is difficult to know what the truth is. Suffering is bearing what's happening. Whatever is in form suffers from the elements and forces of nature and other beings. If it can suffer, it's real in this reality. I don't know whether the formless suffers. I often consider what consequences I or the other will suffer by my decision or action. Being very sure that everyone is suffering plenty helps me from getting impervious to the suffering of others.

Whathas helped me from causingharm to me and to othersis self-awareness. Recognizing the existence of suffering, the causes of suffering, and knowing how to be free from them has helped me to walk on the right path. When I go on the wrong path and suffer, I compassionately relate to it and begin to walk on the right path. There is a saying in Sanskrit my spiritual tradition: Satyameva jayate,
nanrutam. Truth trimphs, not lie. And that is my expareince.
Namste!
Jagdsih P Dave[Hide Full Comment]