Secret Kinship With The Other 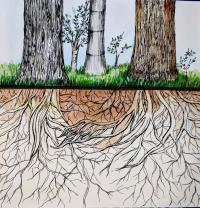 Perhaps genes aren’t the only thing that we’ve been shaped to try and save. Maybe altruism evolves to recognize affinity, joint purpose, shared values. Maybe nothing elicits a sense of relatedness more deeply than feeling our dependence on other living things. A predator depends entirely on its prey; that, too, is a kind of blood bond. [...]

I am a novelist. All day long, I try to inhabit the hearts and souls of people who have never existed in the hopes that existing people might find, in these made-up lives, fictive kin who resemble their friends and provisional families in that realm of consensual fiction that we call the real world. In my fiction, kinship forms through conflict. Through the play of dramatic tension between seemingly inimical values, my characters come to recognize the keys to themselves that others hold.

Secret kinship with the Other—even with the ultimate enemy—is the lifeblood of fiction. (Surely you had to suspect, with a name like Darth Vader, a coefficient of genetic relationship hiding somewhere in the closet?) Leslie Fiedler once made the case that a great number of the canonical works of American literature have involved a plot in which a white person and a nonwhite person, thrown together in emergency, develop mutual dependence. Fiction challenges the barrier between “us” and “them.” It puts relations through the wringer, mangles them, and leaves the idea of family flattened but so much larger.

We’re now in the middle of a family emergency that will test all family ties. Only kin, and lots of it, from every corner of creation will help us much in the terrible years to come. We will need tales of forgiveness and surprise recollection, tales in which the humans and the nonhumans each hold half a locket. Only stories will help us to rejoin human to humility to humus, through their shared root. (The root that we’re looking for here is dhghem: Earth.) Kinship is the recognition of shared fate and intersecting purposes. It is the discovery that the more I give to you, the more I have. Natural selection has launched all separate organisms on a single, vast experiment, and kinship glimpses the multitudes contained in every individual organism. It knows how everything that gives deepest purpose and meaning to any life is being made and nurtured by other creatures.

Can love, in its unaccountable weirdness, hope to overcome a culture of individualism built on denying all our millions of kinships and dependencies? That is our central drama now. It’s the future’s one inescapable story, and we are the characters who will steer that conflict to its denouement.

To find the stories that we need, we would do well to look to the kinship of trees. Trees signal one another through the air, sharing an immune system that can stretch across miles. They trade sugars and secondary metabolites underground, through fungal intermediaries, sustaining one another even across the species barrier. But maybe such communal existence shouldn’t be all that surprising. After all, everything in an ecosystem is in mutual give-and-take with everything else around it. For every act of competition out there, there are several acts of cooperation. In the Buddha’s words: A tree is a wondrous thing that shelters, feeds, and protects all living things. It even offers shade to the axe-men who destroy it. Incidentally, the same man once said: The self is a house on fire. Get out while you can.

Richard Powers is the author of twelve novels. His novel The Overstory won the Pulitzer Prize in Fiction. Excerpt above from his article in Emergence Magazine.

This is beautiful ..it helps us to find oneness with others especially with people from.wjom we parted ways due to differences

translation: All are my relatives (Lakota), therefore I will walk in harmony (Navajo/Diné), blessed to be blessing (Irish Gaelic).

I fully believe that we are in kinship with each other. We are totally interrelated and interdependent. To me, our kinship is a secret only to whomever is unaware of it, perhaps avoiding or denying the fact. I discovered our human kinship through reading, discussion, reflection, and openness to learn. For many, kinship is discovered in coming together during a crisis. I now live with awareness that not only are we one but all creation is one, expressing in a zillion different forms, and that awareness results in my being much more compassionate toward all that is, living and not living. What I've said applies for me in easy and difficult relationships, and is more important for me to remind myself of in the difficult relationships.

I was raised in a relatively poor family. There were times when we did not have enough food to eat. There were kind neighborswho felt for us and showed theirlove and kindness byextending their helping hands. They embodied the teaching of Jesus Christ: Love thy neighbor like thyself. All such experienceshave enriched my life. And I feel deep gratitude for them.These are precious lessons I have learned in my life. They have taught me how to extend my helping hands when someone is going throughhard times. It is by giving we receive as Saint Francis of Assisi taught us. Renounce and rejoice as the ancient book of wisdom Ishavasya Upanishadataught us.

Being honest and open, being empathic and compassionate, serving others when they need my help, asking for help when I need it and being grateful to them for their kindnesshelps me to stay on the path. Receiving and giving are the two wings of the bird of life.
Namaste!
Jagdish P Dave